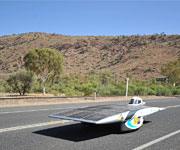 When more than a dozen teams of college kids faced off at the recent alternative-energy competition at the hallowed Indianapolis Motor Speedway for the Formula Sun Grand Prix, there was more at stake than a first-place finish.

The exhibition of the future at the old Brickyard was just the latest of many ongoing events that drive breaking technology for solar cars. Awards were given to teams for excellence in electrical and mechanical engineering, sportsmanship and teamwork.

"Solar car racing is not exclusively about who crosses the finish line first," says Dan Eberle, race director of the American Solar Challenge. "When people think of racing, they think how fast can a car go. Solar cars can go 100 miles per hour, but they're really built for endurance. The competitive goal is to take an electric car and see how far it can go in the most time-efficient manner. Instead of pulling up and plugging into an outlet, you work off solar energy. But you can't control the sun -- it might be cloudy, and that's the challenge. You have a limited amount of power to use, so it's critical how efficiently you can build an electric car. We call it brain sport."

Which is why the exhibitions call out for competitors from top technical and engineering colleges who are looking to develop cutting-edge alternative-energy solutions and break into the auto industry.

Solar cars don't look like muscle cars. They weigh no more than 500 pounds, they use a sun-charged, battery-powered motor, and they're sheathed in silicon-based solar panels. They look like credit cards with driver's seats.

But while this is a brain sport, it's also a blood sport -- competition can be fierce. The University of Michigan, the three-time defending American Solar Challenge champs, regarded the Formula Sun Grand Prix as a pit stop on their way to the ultimate solar-powered goal: October's World Solar Challenge in Australia. The Wolverines are gunning to set the sun on the defending champions from Osaka Sangyo University in Japan.

The Solar Challenge is waged over 1,877 miles from the top to the bottom of the sun-drenched Australian outback. The race is run over public roads, and the cars have to follow local driving regulations. The best driving speed depends on the weather and the remaining capacity of the batteries, which carry the cars through the rain, fog or other inclement weather conditions. The trick is to balance the energy with the speed. Get the mix right and you'll have a chance of not dying in the desert.

"The onboard battery packs will allow you to run a few hours through rain and cloud cover," says Michigan's team member Chris Hilger. "We have a dedicated meteorologist in a chase car who captures weather data and feeds it back to our strategist who writes software to simulate the car and model the car and how it drives. If your meteorologist is good, he should be able to tell you, ‘Hey, we're gonna have cloud cover all day. Our set speed should be a third of what it should be on a sunny day so we don't run out of power.'"

And while the racing is fun, the real winner is technological advancement, which is a natual byproduct of the competition.

"These students don't have any industry in-the-box thinking, so they're thinking of things that other people haven't necessarily thought of before. There are plenty of technologies that have been innovated in the two decades of the solar car program that originated here and go beyond the auto industry," says Eberle. "There are electronic systems and LED lighting that started with these cars and are now being integrated into homes. Composite technologies have been adapted for the aerospace industry and in infrastructure to replace steel. Protection circuitry used in these batteries have trickled into industry."

The University of Michigan's car, Infinium, hopes to improve upon its third-place finish at the last World Solar Challenge. "The international teams are well-financed and have professionals on board," says Hilger, "but we can give our effort something they can't: the good-old American college try."

Brian O'Connor is a print and online journalist. He is a former contributing editor at Men's Fitness and executive editor at Genre. He has also written for Slate, San Francisco Weekly and the New York Daily News, among other publications.