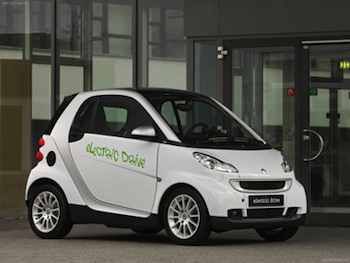 Many consumers already think the smart fortwo is an electric car, so undoubtedly, smart is making a, well, smart move in introducing an electric version (EV).

The company says the introduction of the EV marks “a natural evolution of the smart brand and further defining its environmental leadership.”

One little glitch is that you can’t buy one -- at least not yet. Instead of selling EVs, smart is launching a program this fall that will place electric drive vehicles with “like-minded partners” in select regions of the country.

“The smart fortwo electric drive is the ultimate statement on innovative automotive conservation and further defines the brand’s independent spirit,” said Jill Lajdziak, president of smart USA and former head of GM’s Saturn. “As the United States sets goals on carbon dioxide reduction and oil independence, the smart fortwo electric drive enters the market at the right time and in the right place, as the purist’s play in transportation electrification with a no-compromise design.”

Smart USA will begin deploying a fleet of 250 electric drive vehicles across the United States this autumn, targeting what it calls key electrification leadership cities and Department of Energy grant areas. As part of this effort, the company is targeting companies, municipalities, organizations and individuals interested in making “a passionate statement on conservation and environmental awareness.”

Partners for vehicle placements will be announced later this year, but if you want to buy a smart EV, you’ll have to wait. Series production for consumer sales won’t begin until 2012.

Interestingly, some of the engineering to electrify the vehicle has been in place from the beginning. When smart was conceived more than 20 years ago as the Swatch car, Daimler developers anticipated the need for an alternative power train and factored the integration of electric drive components into the first smart concept.

So now, as engineers integrate the components and battery for an electric drivetrain, the smart fortwo electric drive looks just like its combustion engine counterpart, with the same exterior footprint and large amount of interior head and legroom.

The smart fortwo electric drive vehicles arriving in the United States this year are full electric vehicles, powered by a 30 kW drive motor and 16.5 kWh lithium-ion battery. Using a 220-volt outlet, it takes three and a half hours to charge the battery from 20 to 80 percent of its capacity and less than eight hours to fully charge it. The battery can also be charged using a common household 110-volt outlet. The vehicles can reach highway speeds and offer a range of 82 miles on a single charge.

The information gathered in the phase-two vehicle research will establish the performance, range capability and recharging time of the series production vehicles with third-generation technology.