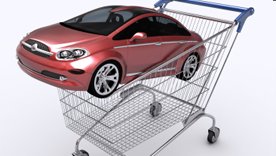 One thing auto industry veterans will tell you is they never saw a year like 2009 . . . and they never want to see another one like it.

The year included the seemingly unthinkable: bankruptcy for General Motors.

And as an added fillip, Chrysler went bankrupt too and was rescued by the unlikely combination of the Obama administration and Fiat, the Italian carmaker that was so disrespected by American car buyers that it fled the U.S. market decades ago.

In the process, thousands of car dealers were jettisoned by GM and Chrysler, and the dreadful economy doomed hundreds more.

The 21 percent drop is tremendous in anybody's book, but that number vastly understates the extent of the decline, because the last four months of 2008 were also disastrous for the auto industry as the recession crashed over it.

For the first seven years of the decade, the sales level was nearly 17 million per year, so a 10.4-million-unit sales year amounted to the quick onset of a depression in auto sales.

Aftermath and the Big 3

The carnage had significant fallout.

Due largely to consumer concerns over their bankruptcy and to consumer backlash over unpopular government support of the two fallen U.S. companies, General Motors and Chrysler each lost significant amounts of market share in 2008. In the process of conceiving a post-bankruptcy recovery plan, GM decided to ditch the Saturn, Saab, Pontiac and HUMMER brands, sending sales of those brands reeling.

Chrysler didn't drop any brands -- having ditched Plymouth prior to falling on hard times in 2008 -- but the company hemorrhaged market share nonetheless.

All of this has resulted in a significant alteration of the top companies in the U.S. market.

Despite its historic drop to less than 20 percent market share, General Motors still retained its title as 2009 U.S. sales leader, but Toyota Motor Sales USA, which enjoyed relative success in '09 despite being dogged by some safety-related issues, moved to within striking distance of the top spot, with a 17 percent market share.

Ford, America's traditional No. 2 automaker, finished 2009 in the No. 3 position, and American Honda blew past Chrysler to capture the fourth spot. Chrysler languished into the fifth position. So much for the "American Big 3," the traditional industry parlance for GM, Ford and Chrysler.

What does all this mean to you, the prospective car buyer?

Well, if you waited to buy a new car because the deals weren't good enough, they will probably never be better than in the first quarter of this year.

Consumer credit is loosening somewhat, interest rates are low and manufacturers and dealers are hungry to sell cars. All this amounts to a buyers' market with significant bargains at most every turn.

But will the economy pick up enough to ease your mind about buying now?

That's where some questions remain. Unemployment is still high, and some shrinkage is still expected in the retail and manufacturing industries, so the first half of 2010 is expected to be a continuation of the tough times we endured in 2009. This might give you pause as a buyer, but it also might present an opportunity to get a better deal than you otherwise might if you act while others are hesitating. Of this there is no doubt: 2010 will be a pivotal year for the American auto industry.

Tom Ripley Driving Today Contributing Editor Tom Ripley writes about the auto industry and the human condition from his home in Villeperce, France.

Driving Today: Will 2010 be a Better Year to Buy a Car