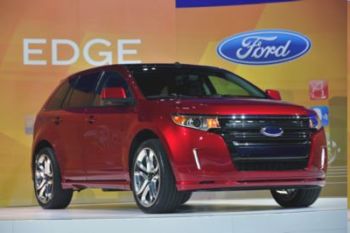 Cars and trucks' "product cycles" last several years, but the public usually gets tired of a vehicle's looks after just two or three years.

This has inspired the "face-lift" -- a quickie series of changes that put lipstick on vehicles that are starting to look like pigs.

But Ford Motor Co. has decided to eschew quickies -- at least in this sense -- for more substantive changes, and the latest proof of that is the 2011 Ford Edge.

Without changing the basic platform, Ford engineers and designers have wrought substantial changes.

The exterior design, always handsome, has been made even more sophisticated and sleek, with the addition of optional 22-inch wheels. The altered exterior is accompanied by an even more dramatic refit of the vehicle's interior, and potential buyers will be especially impressed by the Sony-branded center stack, whose design and controls mimic component audio equipment.

The available MyFord Touch driver connect technology replaces traditional buttons and knobs with three LCD screens and familiar five-way controllers like those found on many mobile phones and personal audio devices. Two of those screens flank the speedometer, while an 8-inch touch screen is the focal point of the center stack.

Control info is displayed on a series of easily selectable screens, and the entire display can be customized for the driver's preferences. In addition to the touch-screen options and button clicks, most functions can be controlled by voice command.

Instead of a single engine choice, three power trains will be available when the 2011 Edge comes to market. The 3.5-liter V-6 has been tweaked to produce 285 horsepower, while the 3.7-liter V-6 available in the Edge Sport delivers 305 horsepower.

Fuel economy fans will be interested in Ford's first application of its 2-liter EcoBoost four-cylinder engine, which is expected to offer the fuel economy of a four cylinder with the performance and feel of a V-6.

Obviously Ford expects big things from the heavily improved vehicle that is smack in the middle of the red-hot crossover segment.