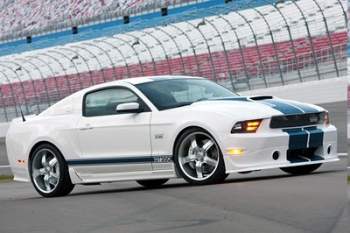 One of many things you can say about legendary car builder and race driver Carroll Shelby is that he doesn't try to be politically correct.

So when he was asked about the creation of a model that still has legions of fans four decades later, he had this to say:

"In 1964, Ford Motor Co. asked Shelby American to turn their secretary's car into a race winner to help them sell Mustangs. Our Shelby GT350 ruled its class at the track and was feared by GM and Chrysler owners on the street. Enthusiasts have anticipated the GT350's return since it went out of production in 1970. Now my band of hot rodders has created a car worthy of the name."

The concept behind the renewed GT350 was to build a car that is light, nimble and powerful.

Beginning with the "small block" 5-liter Ford Mustang GT as its base, the Shelby American team worked with experts from Ford Racing, Goodyear, Borla, Cragar and Baer to create a car that is fast and has razor-sharp handling. Every aspect of the car is enhanced to create a performance pony car that is true to the spirit of the 1965-1970 Shelby GT350. 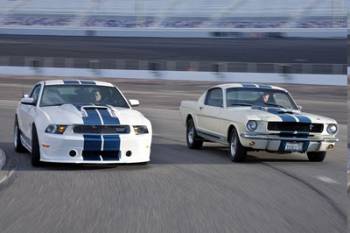 The team worked with Ford Racing to supercharge the engine with a goal of 500 horsepower and to sharpen the handling.

Each GT350 will be painted in traditional white with Shelby guardsman blue Le Mans stripes, and each will feature the new Ford V8 coupled to a six-speed manual transmission. Blue Shelby GT350 valve covers and billet caps set off the supercharged engine. The Baer brake system features a six-piston kit in the front, as well as 14-inch ERADISPEED rotors in the rear, with cooling ducts for all four corners. Cragar supplies the 19-inch wheels.

The suspension of the new GT350 will be upgraded with new Ford Racing springs, struts, sway bars and adjustable caster/camber plates.

The car also receives a new front fascia, taillight trim, front splitter, rear deck lid filler panel and rear fascia. Functional scoops are located on the side rockers and hood. GT350 badges on the outside and inside include a Shelby serial number. The A pillar carries a fuel pressure, oil pressure and boost gauge.

The Shelby GT350 is a "post-title" program, which means customers purchase cars from their local Ford dealers, and each is magically transformed into a GT350 by the Shelby American Team.

That transformation has a MSRP of $33,995, which does not include the price of the base car. (Didn't we just go over that?)