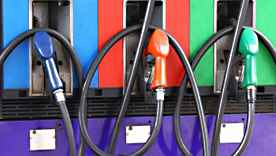 European observers have to wonder what the Americans are up to when it comes to fuel economy.

For decades, European countries have limited their use of petroleum by instituting stiff taxes on motor fuel. This takes a big chunk from the earnings of every European driver, but it also cuts down on fuel usage in a fairly direct manner. In contrast, Europeans who understand the American system for curbing petroleum use, the federal Corporate Average Fuel Economy (CAFE), are struck by its obtuseness.

And now the Obama administration is poised to kick CAFE into overdrive, proposing a 56-mpg fuel economy requirement by 2025. Should the regulations be imposed, the world's automobile companies will have to figure out a way to not only build vehicles that can deliver 56-mpg performance, but also persuade enough Americans to buy them. Auto industry experts agree that the latter is much more difficult to accomplish than the former.

In making the new proposal, the U.S. government has spread the word that the proposed standards, which almost double the current requirements, can be achieved simply by adding cost in the vehicle-manufacturing process. Some hybridization here and there and, bingo, cars can meet the new standards. It has also taken the line that the additional costs involved in manufacturing and marketing vehicles that can achieve the drastically higher fuel economy ratings -- costs that presumably will be passed on to consumers -- will be recouped by those same consumers from the cost savings that will accompany higher fuel efficiency. The story is that consumers will pay more for the vehicle upfront, but they will get that money back in gas savings. Independent observers question how realistic that is, though, because there are several items that the proposal's proponents either miss entirely or gloss over.

For example, buyers will be forced to pay more for new vehicles than they otherwise would have had to pay for the new, more fuel-efficient technology, but the payback period for that added expense will likely extend well beyond the typical ownership cycle. They'll pay more initially; that's clear. But when, or if, they will get that money back is decidedly unclear. The payback period will depend on fuel prices. If fuel prices are $3 per gallon (inflation-adjusted), then the payback period will be far longer than if fuel prices are $5 per gallon. What should be clear is the higher purchase prices for new vehicles will have a significant negative effect on overall demand. If you kick up the price of the average new car by $2,500 -- roughly 10 percent -- it will clobber demand for new vehicles. What happens when demand for new vehicles diminishes? You don't have to be a Rhodes Scholar to figure out that fewer new cars will be built and sold, and because of that, a number of men and women involved in the manufacturing, marketing and sale of new cars will suffer economically. There is little doubt many will lose their jobs. In reaction to the higher prices for new cars, consumers will continue to drive their current vehicles longer, meaning the new regulations will, in essence, keep older, less-fuel-efficient and higher-emission vehicles on the road longer. The values of used vehicles will go up, making it more difficult for low-income consumers to buy any cars at all.

So, despite the rosy predictions that the higher fuel economy standards are a win-win, there is virtually no doubt that both consumers and the car industry will be hurt if the higher standards are instituted. Those familiar with the European model wonder why Americans don't simply institute dramatically higher fuel taxes if the goal is to curb fuel use. The answer is that politicians lack the will to do that because it would jeopardize their chances of re-election. Instead, they continue to shift the burden to the car companies and to consumers.