Is Propane the Fuel of the Future? 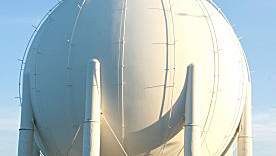 In many parts of America, gasoline prices have shot up to $4 per gallon or more -- and that rapid increase has had the predictable effect of prompting many consumers to take a second look at alternative energy sources. One of these – propane -- has a long and positive history as a transportation fuel, but it has been often ignored in the hype about “the hydrogen economy,” gasoline-electric hybrids, and dedicated electric vehicles. Even ethanol, which will be the subject of next week’s feature, has received much greater attention than propane. But now there are signs that the worm is turning and that propane’s considerable virtues as a transportation fuel will finally be more widely recognized.

Interestingly enough, it was a recent speech by President Barack Obama -- who is generally seen as a strong electric-car proponent -- that has given the propane backers new hope. The president outlined a variety of goals, including the importance of securing America’s energy supply, saving consumers’ money at the pump and creating a cleaner environment.

“We cannot keep going from shock to trance on the issue of energy security, rushing to propose action when gas prices rise, then hitting the snooze button when they fall again,” said Obama during a recent speech at Georgetown University. “It is time to do what we can to secure our energy future.”

Frankly, those who back propane as an alternative fuel think the abundant gas has the potential to help the president meet all of his goals. Ninety percent of the propane consumed in the United States is produced domestically. While you can count the number of hydrogen filling stations in the entire nation on your fingers and toes, thousands of propane refueling stations across the country make propane gas convenient and available. In fact, proponents claim there are more propane “autogas” stations than any other type of alternative-fuel station, although ethanol boosters may dispute that. One fact is indisputable: Propane is the only alternative fuel with stations in every state.

While propane has found the sledding tough in much of the United States, there are more than 15 million vehicles operating on propane worldwide. According to the U.S. Department of Energy, more than 270,000 on-road vehicles operate on propane across the United States. Of course that is a drop in the ocean compared to the number of vehicles that use gasoline or diesel fuel, but it does prove the viability of propane as a transportation fuel. Frito-Lay, ThyssenKrupp Elevator, Schwan’s, Red Top Cab and SuperShuttle are among the many companies that operate fleet vehicles powered by propane.

In fact, it is in trucks rather than in cars that propane might find a firm and expanding role in fueling America’s vehicles. Light- and medium-duty trucks and vans fueled by propane are available from a number of industry-leading manufacturers, including ROUSH CleanTech for Ford Motor Company commercial vehicles and General Motors commercial fleet products through a partnership with CleanFUEL USA.

The major hurdle for the clean-burning abundant gas might be the prejudice some diehard environmentalists have against vehicles that burn any fuel at all. These all-electric proponents have previously had a likely ally in President Obama, but his most recent words on the subject seem to offer hope to those who think propane can be part of a national energy solution to pollution and the vagaries of foreign oil.

Driving Today Auto Review - Is Propane the Fuel of the Future?