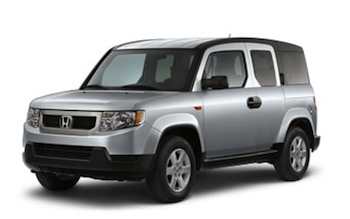 The Honda Element was introduced in the midst of the SUV craze when it was all the rage to go off-road -- or at least pretend you did. Now the bloom is off that rose, but the good news for Honda is the Element was never your typical big-engine SUV anyway.

So the 2010 Element has transitioned to being thought of as an all-around cargo-hauler for folks with active lifestyles. Of course, they better not have more than three friends, because the Element only seats four, although its interior is remarkably versatile.

It features an easy-to-clean urethane floor and an expansive, flat cargo area that offers about 75 cubic feet of space with rear seats removed.

The Element has never been a speed demon, and this year’s edition is no different. However, its 2.4-liter four-cylinder engine offers 166 horsepower, and more to the point, fuel economy of 20 mpg city and 25 mpg highway on its front-wheel drive models. With RealTime, four-wheel drive economy suffers by 1 mpg. Now vehicles of similar size, like the Chevrolet Equinox and GMC Terrain, offer significantly better highway fuel economy (30 mpg).

Among the Element’s cool new features is the fact that the optional navigation system now offers real-time traffic information so you can avoid the crowds on the way to the kayak launching ramp.

But for $25,000, the Honda Element does offer significant versatility and that hard-to-define “cool factor.”