Ford Vertrek: An Escape From the Escape 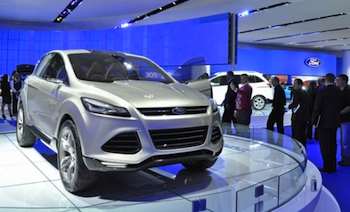 If you have champagne tastes and a beer budget, your crossover choices have been limited to some stalwart -- but unexciting -- choices like the Ford Escape.

Now -- based on a long, hard look at the Ford Vertrek compact crossover concept just introduced at the North American International Auto Show -- we can report that things will change. The Vertrek might bear the Escape name when it is launched here in the U.S., but whether it does or not, it is a sleeker, sportier design that gets its inspiration from the popular European Ford Kuga, and it looks right at home in the company of BMW and Mercedes-Benz compact crossovers.

Though introduced as a concept vehicle, the Vertrek is destined to be built in huge numbers.

It’s designed to be equipped with a 1.6-liter EcoBoost engine that’s equipped with Ford auto start-stop technology, and that technology is aided by hybrid-style regenerative brakes that keep the battery in the proper state of charge. Thanks to those high-tech touches, Ford expects the model to be a fuel-economy leader in its hotly contested segment. And a wide variety of other powertrains, including diesels for overseas markets, also fit under the sculptured hood.

In fact, the muscular hood is just one of the design elements that bring the kinetic design-themed Vertrek to life. The design also sports the lower, tri-sectioned trapezoidal grille that is seen on the upcoming Ford Focus. Headlamps and taillights are slim, the wheel arches are beefed up, and the rising beltline melds nicely with the sleeker roofline. In total, it makes the current Escape look old.

Inside, the dash features a winglike profile that spans the cockpit and visually extends through the side glass into the rear-view camera mounts. The center console swoops between the seats, dividing the seating area into four individual zones. While the instrument panel is wrapped in dusk-gray leather, the slim seats are clad in naturally tanned velour. The interior is also highlighted with neon red-orange fluorescent accents. Replacing conventional carpet, the Vertrek concept incorporates handcrafted woven-leather floor materials, so we wouldn’t suggest hosing it down when cleaning. Don’t expect all the cool-but-weird interior stuff to make it into the production version, but you can expect that the new Ford compact crossover, whatever its name, will look a whole lot like the Vertrek.