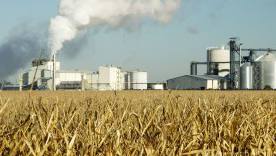 Of course, ethanol is derived by distilling vegetable material -- primarily corn -- so America’s farmers are generally in favor of the expansion of ethanol use. Others claim that creating fuel from ethanol actually uses more energy than it creates, and that it threatens the country’s food supply. The Renewable Fuels Association (RFA), the key trade association of ethanol producers, is certainly gung ho about the fuel, but it is also convinced that the commercialization of advanced ethanol technologies will not happen without meaningfully expanding the market for ethanol-blended fuels, and it would like the federal government to make that happen.

“For the Renewable Fuels Standard’s ultimate goal of 36 billion gallons of renewable fuel use to be realized … additional federal efforts to open markets, stimulate investments in new technologies and assist in the development of infrastructure for these new fuels will be necessary,” said RFA President and CEO Bob Dinneen in prepared testimony before Congress.

Why should the government promote ethanol use? Well, it is renewable and domestically produced, and it uses the current fuel-delivery infrastructure. Curr Tom Ripley ently, ethanol represents approximately 10 percent of the nation’s gasoline, with nearly 14 billion gallons of production expected this year. The RFA estimates some 8.5 million vehicles currently on the road are flex-fuel vehicles (FFVs), which means they can operate on conventional gasoline or on ethanol. This means FFVs are the largest alternative-fuel vehicle fleet in the country, far outnumbering natural-gas vehicles, plug-in hybrids, electric vehicles, and other alternative fuel vehicles. Additionally, approximately 2,700 out of some 162,000 retail gas stations offer ethanol blends above the standard E10 (10 percent ethanol). The problem is that only a relative few of America’s FFVs are typically fueled with ethanol; the remaining ones are typically filled with conventional gasoline.

That’s one of the reasons the RFA would like to see some changes made on the federal fuel policy front. Specifically, Dinneen identified four policy and regulatory steps that are needed to allow ethanol-blended fuels to gain greater market share versus what RFA calls “the monopoly oil interests”:

The RFA would also like to see legislative action that requires a percentage of new vehicles sold in the U.S. to be flexible-fuel-capable, and it would like the federal government to mandate the installation of an ethanol-refueling infrastructure.

To get even a part of this agenda approved is problematical, however. Neither the president nor his administration is an ardent booster of ethanol. Many in the administration appear to prefer electric vehicles and hybrids to ethanol-powered cars and trucks, so ethanol proponents may find the next couple of years very difficult.