Did You Deserve That Speeding Ticket? 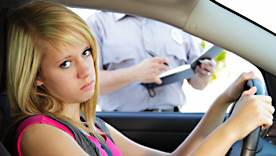 Speed kills. That’s a truism in the world of auto safety that is held sacrosanct.

In 2009, according to our own federal government, speeding was a contributing factor in 30 percent of all fatal crashes, and 12,628 lives were lost in speeding-related accidents. In addition to the deaths -- which dwarf the number of U.S. military personnel killed in the wars in Iraq and Afghanistan during the same time period -- the economic cost to society of speeding-related crashes is estimated by the National Highway Traffic Safety Administration to be $28 billion per year.

So you can see why local, state and federal agencies want to regulate speed on our roads. But at the same time, virtually all of us have received a speeding ticket or other “moving violation” that we felt was unfair and unfounded.

Now, thanks to a new smartphone application, you can check on yourself and on that policeman who wrote you up. It’s like having “Big Brother” in your pocket.

My Max Speed logs your rates of speed every five seconds you are in motion, so you can easily review them and confirm you’re driving within the safe legal limits. Currently available for Android phones, the app features a large-format display that shows you your highest rate of speed in the past five minutes of driving. The data is stored in a spreadsheet and can be exported to Microsoft Excel, Word, PowerPoint and other software. You can even send your reports to others through email and share them on Facebook. Inside the app’s spreadsheet display, each speed recording can be tapped to display its exact physical location in a map format.

Users of the application who are pulled over for driving over the speed limit can confirm in an instant that their rate of speed matches what the law enforcement officer reports. In some cases, this may point out that the officer’s method of capturing the rate of speed was flawed, thus potentially saving the driver hundreds of dollars in fines. In other cases, it might be used as evidence to contest secondary offenses, like failure to wear a seatbelt, that are not grounds for a traffic stop but can be charged after a traffic stop for alleged speeding. If the speeding charge is disproved, courts might be inclined to dismiss the secondary charges as well. On the flipside, the app also helps drivers become more aware of their own driving speeds, possibly reducing the risk of accidents caused by speeding.

“There are hundreds of reasons to run My Max Speed on your smartphone,” says Wayne Irving, CEO of Iconosys, the maker of the application. “We expect many will help protect drivers’ rights, while others will make the roads safer. For example, our children are more apt to drive slower and safer if they know there is a chance that I will be checking their speed reports.”

My Max Speed is available for free in an ad-supported version; the ad-free version can be downloaded for $4.99 from the Android Market or its developer.

Driving Today Auto Review - Did You Deserve That Speeding Ticket?