Chevrolet Camaro ZL1: The Thrill is Back 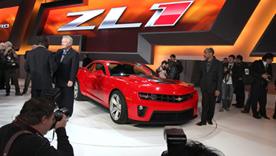 Are you bored by all the talk of electric and hybrid transport devices? Heard enough about tiny, fuel-sipping grocery-getters and commuter pods? Well, if you are, Chevrolet is ready to jet you right back to 1969, when the concerns that spawned many of today’s cars were way over the horizon. Back in the Woodstock era, Chevrolet slipped a 427-cubic-inch Corvette ZL 1 V-8 into a select few Camaros, and the car became the best-performing Camaro of all time. To honor that heritage, Chevrolet has decided that its new model, which was unveiled at the Chicago Auto Show, will be called ZL1.

Though it has already been seen by the press, the new ZL1 will not go into showrooms until early 2012, likely as a 2013 model. That’s a long time to wait for what will be the hottest-handling, best-performing Camaro ever, and the most technically advanced car of its type the world has ever seen. The heart of the new ZL1 is Chevrolet’s LSA 6.2-liter supercharged engine, which is expected to produce 550 horsepower and 550 pound-foot of torque. Built on the legendary Chevy small-block architecture, the LSA features an intercooled supercharger system, premium heat-resistant aluminum-alloy cylinder heads, lightweight reciprocating parts, high-strength hypereutectic pistons and piston-oil squirters. (Yes, squirters.) The forced induction comes from a sixth-generation Eaton supercharger with four-lobe rotors.

Backing the engine is a high-performance MG6 version of the Tremec TR6060 six-speed manual transmission used with a dual-mass flywheel and twin-disc clutch. The ZL1 also features a dual-mode exhaust system, which alters the sound level and character in response to engine rpm. First used on the Corvette and specifically tuned for Camaro ZL1, the dual-mode exhaust will give the car a signature sound.

To make certain handling match its acceleration, the ZL1’s suspension tuning has been revised, and the magic elixir of Magnetic Ride Control has been added. The advanced magnetic system will offer two driver-selectable modes (Tour and Sport). In keeping with its track-ready persona, the ZL1 features massive Brembo brakes.

All this is accompanied by bodywork that enhances the car’s no-nonsense performance image. The front fascia includes a front splitter and vertical fog lamps, while the aluminum hood is combined with a carbon-fiber center section that creates aerodynamic downforce. The 20-inch forged aluminum wheels are lighter than the 20-inch wheels used on the Camaro SS. We especially like the new treatment of the front fog lamps, which is both functional and attractive.

Inside, the ZL1’s front seats have microfiber suede inserts. Other enhancements include a redesigned steering wheel, alloy pedals, head-up display with unique performance readouts, and the retro four-pack auxiliary gauge system with boost readouts. Testing of the ZL1 will continue throughout this year, and the ZL1 will finally appear in Chevy showrooms early in 2012.

Luigi Fraschini is a Driving Today contributing editor based in Cleveland. He writes frequently about auto safety and other auto-related issues.