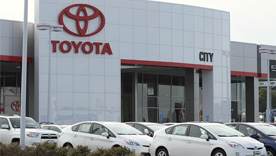 For a long time, Toyota had everything going its way.

Its vehicles were adored by the American public and revered overseas. It was acknowledged as the automotive-technology leader.

Plus, it shot past General Motors to capture the top spot on the light-vehicle sales and production charts after assuming the throne of the “world’s leading automaker.”

The economic disaster of 2008 and 2009 hampered the Japanese auto giant in the United States, but globally, Toyota remained in a strong position to become an even more dominant force as 2010 dawned.

But then the unthinkable happened: Toyota tripped over its own shoelaces in the form of an “unintended acceleration” issue that mirrored what Audi had experienced a generation earlier.

The “unintended acceleration” and safety recall problem threatened the very core of the company, since Toyota had built a reputation as a car manufacturer that didn’t make mistakes. Other auto builders might put products with iffy quality into the marketplace and then suffer the consequences of consumer outcry, but not Toyota. Sure, its cars and trucks weren’t the most exciting in the marketplace -- or the least expensive -- but they sure as heck didn’t break. Then, out of the blue, we began to hear reports that Toyota and Lexus vehicles allegedly did some pretty scary things, like accelerating wildly when the brakes were applied. Even more damning, we learned the Toyota officials had worked hard behind the scenes to cover the stories up.

Now some automotive experts will tell you that suffering a bout of “unintended acceleration” in a car is akin to being gored by a unicorn. It just can’t happen. Others will say that intermittent, unrepeatable electronic and/or mechanical problems can, indeed, happen; they are just, by definition, impossible to repeat. No matter how you feel about the entire issue, there is no doubt that the deluge of bad publicity that started almost exactly one year ago was devastating to Toyota’s reputation and to its bottom line. People who track such things said that fewer and fewer consumers considered buying Toyota and Lexus vehicles as the crisis deepened. Owner loyalty dropped, and Toyota’s used-vehicle values, which had stood tall on the citadel of its quality reputation, took a tumble as well.

Oh, then there’s the company’s sales performance in the United States, which is the second-largest car market in the world. In December 2010, Toyota sales tumbled 6 percent in an overall market that was up 11 percent. Even unheard-of levels of incentive spending by the automaker couldn’t quell the downward trend. But despite having its turn as whipping boy -- something that General Motors also experienced -- and despite the fact that some have predicted its steady decline, Toyota can expect to recover quickly this year. At North American International Auto Show in Detroit recently, it showed off a full line of new Prius vehicles, which places firmly at the forefront of the hybrid segment. Even more important, new versions of old, reliable favorites like the Corolla and Camry will eventually arrive on the scene to expected fanfare. By this time next year, we expect consumers and the press alike will be singing Toyota’s praises again.