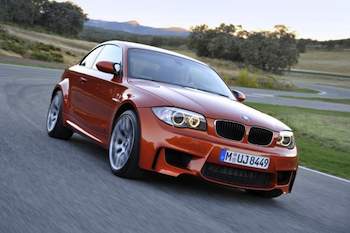 If you test vehicles for a living, you will eventually come to the conclusion that cars that are good on the street are not so good on the racetrack. Racecars are one-dimensional vehicles designed for going fast in controlled conditions. Street cars, on the other hand, have to perform a much wider variety of tasks. So we have to admit, we were a bit curious -- if not skeptical -- about what the all-new, limited-production BMW 1 Series M Coupe would feel like on the track. What we found is that the M Coupe can more than meet the rigors of a very challenging course. Yet, like Superman when dressed as Clark Kent, it is perfectly at home in more mundane settings, like commuting to work or picking a child up from school. In other words, it is one of those rare passenger cars that is in its element on the track, but also utterly practical for day-to-day use. It’s an amazing feat accomplished by judicious acquisitions from the BMW parts bin and a serious influx of engineering dollars.

If you follow performance cars, you know that BMW has been building highly tuned M versions of many of its models for decades. These cars raise the already high level of handling, acceleration and braking from those of the marque’s standard passenger cars, which carry the bold slogan “The Ultimate Driving Machine.” Plus, when putting the 1 Series M Coupe together, BMW engineers borrowed liberally from the same bag of tricks they used to make the M3 -- one of the most respected sports coupes in the world. So M’s are, put simply, the “Ultimate Ultimate Driving Machines.”

So why isn’t the M Coupe called the BMW M1?

Frankly, that’s the only thing about it that is unwieldy. With 335 horsepower and 332 pound-feet of torque available from its twin-turbo, all-aluminum, in-line six-cylinder engine, the M Coupe is a rocket sled. It will sprint from 0 to 60 miles per hour in just 4.7 seconds, and its top speed is electronically limited to 155 miles per hour. Offered only with a six-speed manual transmission, the car has EPA fuel economy ratings of 19 miles per gallon in the city and 25 on the highway -- a performance car with a conscience.

It’s also equipped with computerized electronic driver aids that allow you to push its limits, yet help prevent you from tumbling over the other side. For example, its standard Dynamic Stability Control keeps a sharp eye on overaggressive maneuvers that could dent its handsome sheet metal … or worse. But the DSC also has an intermediate M Dynamic Mode that M Brand Manager Matt Russell refers to as a “track training mode.” It allows yaw and wheel-spin, but if the electronics intrude upon your driving style in this mode while you are on the track, you are probably doing something wrong. Like a stern but loving kindergarten teacher, the DSC quickly nudges you back in line.

While we can’t say we were in love with our kindergarten teacher, we love the 1 Series M Coupe a lot. Our only regret is that so few will come to the United States, something on the order of 1,000 cars. Now that might be the extent of the market for a $50,000 car of modest dimensions equipped with a manual transmission, but we have to admit we are thinking very seriously of putting down a deposit and getting on the waiting list. The 1 Series M Coupe may have a clumsy name, but it is anything but clumsy.

Tom Ripley is a Driving Today contributing editor who writes about the auto industry, performance cars, and the human condition from his home in Villeperce, France.