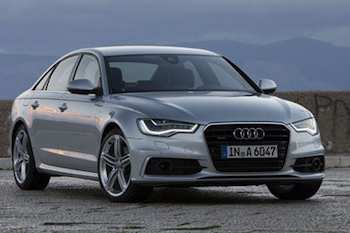 Sibling rivalry can often be a terrible thing, but in the case of the new version of the Audi A6 sedan -- introduced to the press at the North American International Auto Show -- it can be just great.

We say that because the new A6 takes a lot of what is so good about the flagship A8 and it folds it into a more affordable, accessible package. With a praiseworthy drag coefficient of 0.26, the A6 offers the same aerodynamic styling as its larger brother. And the A6 uses a version of the A8’s LED headlight treatment that is rapidly becoming iconic.

Low, long and wide were adjectives previously used to describe American cars, but Audi has adopted all three as it has redesigned its sedans.

But don’t think this interior springs from the same genre that includes the Lincoln Continental Mark IV or the Cadillac Eldorado -- no wretched excess here. Instead, the dash sweeps around driver and passenger, enveloping them in a tasteful mixture of leather, metal and layered-wood veneer. While the driver isn’t precisely in the middle of it all, you can say that is true figuratively at least, because the gauges and controls favor the driver’s point of view. Front seats offer both ventilation and massage functions, and the ambient lighting has been designed to give the interior the feel of a chi-chi nightspot -- not a bordello.

Audi’s well-regarded MMI radio/navigation interface gets a new iteration in the A6, using a touchpad to control a wide variety of functions.

While European-market A6s will be fitted with a plethora of gasoline, diesel and even a hybrid powertrain, here in the States the A6 is expected to come to market powered with a choice of the 2-liter, turbocharged, in-line four-cylinder engine, or the 3-liter supercharged V-6.

To aid fuel economy in the V-6, the Tiptronic transmission has been re-engineered to offer eight forward speeds.

Following its Euro launch, we expect the A6 to go on sale here in the American market in the second half of this year.