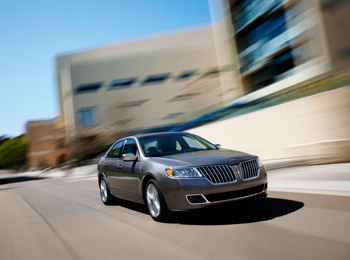 Similar to the Ford Fusion Hybrid already on sale, Lincoln’s first-ever hybrid is expected to deliver at least 41 miles per gallon in the city when it hits the market this fall.

The MKZ Hybrid’s projected fuel economy tops its nearest competitor (the 2010 Lexus HS 250h) by 6 mpg, despite the fact that it’s a five-passenger vehicle. (The Lexus can only accommodate four.)

While that statistic might not mean much in real-world driving, buyers will probably be impressed by the MKZ Hybrid’s standard features like SmartGauge with EcoGuide, Ford’s interactive technology that offers real-time information to help drivers maximize fuel efficiency.

Well-to-do environmentalists will be pleased to learn the veneers come from well-managed forests, as defined by strict environmental, social and economic standards, and from other rigorously controlled sources. The hybrid also includes standard Bridge of Weir leather seats, but we were unable to ask the cows how they feel about that.