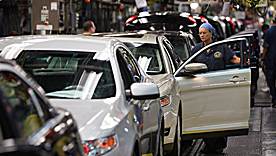 Usually, car companies keep their new models under wraps until the very last minute because they would like to sell the current models for as long as they possibly can. Since new models frequently make current models look hopelessly outmoded, you can understand where they are coming from.

But today, that method of madness might be changing simply because the competitive pressure to capture the public fancy is so great. The year 2013 is still way off in the distance for most of us, but Ford used the New York International Auto Show as a venue to introduce its 2013 model year Taurus and Taurus SHO, two very important models in its portfolio. Since General Motors took the same opportunity to show its 2013 Chevrolet Malibu, you can understand why Ford was willing to pull the wraps off the Taurus early.

The biggest piece of news is the fact that the 2013 Taurus will be the first car in Ford’s North American lineup to offer the 2.0-liter EcoBoost engine, which uses a turbocharger and direct injection to deliver highway fuel economy that is expected to be at least 31 mpg. Lest you think the engine is too weak to power the substantial Taurus, rest assured it will offer an estimated 237 horsepower.

Equally encouraging is the upgrade on the standard 3.5-liter V-6, which will get a bump of 27 horsepower to about 290 horsepower thanks in large part to the addition of twin independent variable camshaft timing. Both engines are teamed with unique six-speed automatic transmissions that are engineered to maximize their special benefits. And in this era of high fuel prices, it is nice to know that a great deal of engineering time went into gasoline-conserving tech, such as a low-tension accessory drive belt, smart battery management, a variable-displacement air conditioning compressor, and reduced-friction lubricants.

The electric power-assisted steering not only saves gas; it also can be tuned for more responsive handling and a better feel. And who doesn’t like a better feel?

The Ford engineers didn’t stop at tweaking the steering either.

They also hard-mounted the steering rack and optimized the springs and shocks. Then, they dipped into the relatively new art of electronic torque vectoring. The feature, which will be standard on all 2013 Tauruses, applies a slight amount of braking force on the inside front wheel when accelerating through a corner, providing an effect analogous to that of a mechanical limited-slip differential. The result is a vehicle that feels more maneuverable, largely because it is. Working out of the same trick bag, engineers also added curve control, a braking control innovation aimed at averting single-car accidents that occur when drivers enter curves too swiftly. The application of so-called “smart four-wheel braking” can turn a potential crash into a non-event. Additional safety items include adaptive cruise-control, collision warning with brake support, Blind Spot Information System, cross-traffic alert and the MyKey feature, which enables parents to limit top speeds and audio volume. It can also prevent kids from listening to the adult channels on satellite radio.

To accompany these changes, Ford designers have refined the already handsome and distinctive Taurus exterior.

The new Taurus features a more muscular hood, as well as larger wheels and tires that better fill out the wheel-well openings. At the rear, larger, full LED tail lamps are affixed to the Taurus’s heftier haunches, and the SHO model is graced with an attractive new grille. New features include a heated steering wheel, multi-contour seats with Active Motion rolling massage, rearview camera and rear-window power sunshade. Auto high-beams and rain-sensing wipers are other luxury-class-grade additions.

Suffice it to say the 2013 Taurus is filled with innovation, and it looks better than the current car to boot.

Normally, a car company wouldn’t be tipping its next hand so early, but these are very competitive times, and the New York International Auto show is a big stage. We’ll see whether showing their cards so soon was worth the gamble.