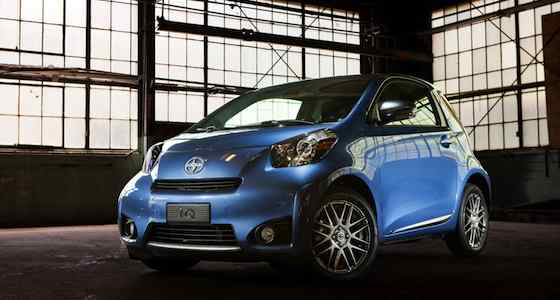 We’ll soon find out if America is ready for what is being billed as the world’s smallest four-seat car.

The Scion iQ is only 10 feet long, yet it will accommodate four people -- in a way. The “micro-subcompact” will arrive in Toyota-Scion dealerships this October, with a national launch slated for 2012. As you might guess, the iQ is not designed for the “Kate Plus Eight” crowd, but neither is it aimed at the stars of “Little People, Big World.” Instead, Scion says its new offering is designed to meet the needs of a new trendsetting generation of urban drivers, and it further claims that the iQ is a small car that offers the functionality and comfort drivers expect from a car twice its size.

How does it do so much with so little?

The iQ contains six (yes, six) engineering innovations that are responsible for the iQ’s ability to be small in size, but large in capability. A compact front-mounted differential, high-mounted steering rack with electronic power-steering, and a compact air-conditioning unit enabled Scion engineers to make significant decreases in front-end length. In addition, the iQ is equipped with a flat gas tank housed beneath the floor that reduces rear overhang. Slim-back front seats optimize rear legroom, while the innovative (wacky?) “3+1” offset seating arrangement allows one adult to sit behind the front passenger and a child or small package behind the driver. (Our guess is a package would be more comfortable there than a child.)

The iQ isn’t so small that you can pick it up and take it into your apartment, but it’s close. With its minuscule 78.7-inch wheelbase and overall length of only 120.1 inches, it can park in spaces that might be difficult for a Honda Civic. In fact, it is only a little over 1 foot longer than it is wide. Happily, power comes from something more than a tightly wound rubber band. Instead, it offers a 1.3-liter, four-cylinder engine that produces a rather robust 94 horsepower and 89 pound-feet of torque, teamed with a continuously variable transmission for optimum efficiency. Interestingly, fuel economy is not as high as you might guess given the car’s diminutive size. Its EPA-estimated combined fuel economy rating is 37 miles per gallon.

Befitting its premium microcar label, the iQ is fitted with an impressive list of items for your safety, comfort and convenience.

Included in the array are an industry-leading 11 standard air bags, including the world’s first rear-window air bag. (It’s almost like the air bags have air bags.) Also standard are antilock brakes (ABS), electronic brake-force distribution (EBD), brake assist (BA), traction control (TRAC), vehicle stability control (VSC), Smart Stop Technology brake-override, and a tire-pressure monitoring system. Also standard is the Scion Drive Monitor, which displays information, such as outside temperature, average MPG and an eco-drive indicator that helps the driver maximize the iQ’s fuel efficiency. The standard audio system might not let you tune in to radio broadcasts from Mars, but almost. The AM/FM/CD/USB 160-watt Pioneer audio system features Bluetooth connectivity, which allows hands-free phone connection and streaming audio capability, plus HD Radio. The iQ will have a suggested retail price of $15,265.