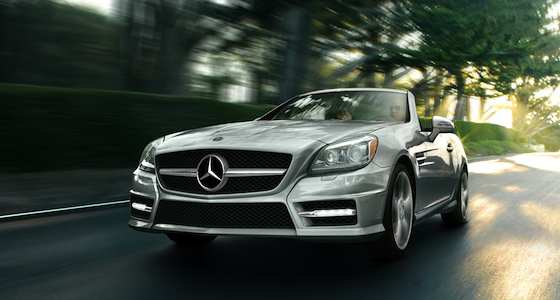 Car models that hit it big often have a "hook."

It might be gull-wing doors, a spare tire grafted to the rear end, or a two-piece rear window. For the original Mercedes-Benz SLK, the hook was its retractable hardtop roof -- something the auto industry hadn't seen since the Ford Skyliner of the 1950s. But while the Skyliner was as much a publicity stunt as a real car, the first-edition SLK was a solid performer that could be transformed from a roadster to a coupe with the push of a button.

For 2012, the SLK is all-new -- and this time around, a new V-6 engine and more muscular styling make this the most aggressive SLK ever.

One of the reasons for the first SLK's success was that it wasn't as hard-edged as most competitors' performance cars, which include the BMW Z4 and the Porsche Boxster. But each edition of the SLK has become more performance-oriented than the last. The 2012 offers outstanding acceleration, confident road-holding and responsive steering, and the new 3.5-liter V-6 engine features direct injection and multispark ignition to generate 302 horsepower and 273 pound-feet of torque. The sprint from 0 to 60 miles per hour takes just 5.4 seconds. Thanks to its well-tuned suspension and beefy tires on 18-inch wheels, the cornering and stability are right there with those of the car's competitors. On top of that, the retractable hardtop roof (which comes in three flavors) allows you to transform the car from a roadster to a coupe in 22 seconds -- a pretty cool trick.

While the typical company might be taxed to engineer one power-operated top and style the car so it doesn't look awkward, Mercedes-Benz has engineered three. You can opt for the standard body-colored polycarbonate roof, the panorama roof of see-through polycarbonate, or the Magic Sky Control roof that can be translucent or opaque according to your whim. The roof doesn't really use magic, but it sure seems like it. When an electric current is applied to nanoparticles sandwiched between layers of polycarbonate, light will pass through. When the current is turned off, the particles block light from the interior.

The overall exterior design lacks the individuality of the Boxster or Audi TT, but it is an attractive blend of classic Mercedes-Benz lines and contemporary touches, like the optional Bi-Xenon headlights and LED taillights. It looks good with the top up or down, which is something many retractable hardtops can't claim. Some are downright hideous.

No one really complains that the interior of the Z4 or TT are too spare, but the SLK drenches you in luxury -- despite the fact that the cockpit is reasonably small and there is no behind-the-seats interior storage. We loved the heft of the thick-section, three-spoke steering wheel that is flat-bottomed, and the SLK seats are power-adjustable, comfortable and covered in sun-reflecting leather that dramatically reduces the rate at which they heat up in bright sunlight. Each seat hides a side air bag in the back and sports a NECK-PRO active head restraint that moves forward in serious rear-end collisions.

Also on the list of safety equipment is the innovative Attention Assist system that couples a steering movement sensor with software that can identify the erratic steering corrections drivers make as they begin to get drowsy. The warning message about your questionable behavior is a steaming cup of coffee icon that appears on the instrument panel. To supplement the pretensioner-equipped seatbelts, the SLK has eight airbags, including two knee airbags.

All of this and more is available to you right now from your local Mercedes-Benz dealer for about $55,000. A less expensive and more fuel-efficient four-cylinder model is expected after the first of the year.