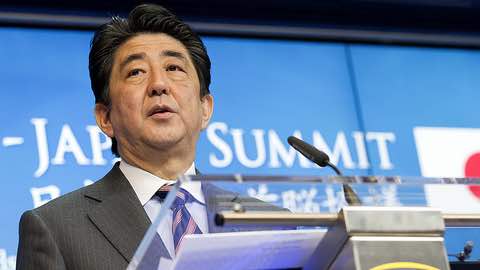 By reiterating Japan's"unshakable" apology for World War II and legalizing the necessary enhancements to operate its Self-Defense Forces like a normal national armed force of a state, Shinzo Abe (Prime Minister 2006-7, 2012-present) has done a meritorious job to consummate Japan's statehood, thus enabling the Japan-China relation to move on to another stage of collaboration in due course.

For as long as two decades after the Treaty of Peace and Friendship was sealed by Takeo Fukuda (PM 1976-8) and Deng Xiaoping in 1978, Japan and China maintained a smooth working relation, particularly in trade and fixed investments. Despite the ongoing islands dispute, a joint statement was issued in June 2008 at the Tokyo summit between Yasuo Fukuda (PM 2007-8) and Hu Jintao (President 2003-13) to attest their commitment in working out a joint East China Sea development scheme. Anticipation was actually high for a deal."Rumors circulated in early February (2008) that a breakthrough was close ... that the dispute might be nearing some kind of resolution". Details of two scenarios regarding the Chunxiao complex, median line and names of the selected oil exploitation corporations as the terms of the resolution were disclosed [Note 1].

Perhaps, such big progress revoked a fear which was highlighted by the renowned book published by Samuel P. Huntington (White House Coordinator of Security Planning for the National Security Council during the Carter Administration) in 1997:

"... it is in the interest of the United States ... to slow the drift of Japan away from the West and toward accommodation with China ..."

"... Assume the year is 2010 ... Japan announces its neutrality and quarantines the bases (e.g. Okinawa) ... The United States ... engaged in a truly global struggle against China, Japan and most of Islam ... The alignment of Japan with China ... gives China the protection of an insular cordon sanitaire preventing the United States from using its naval power against the centers of Chinese population and industry along its coast ..." [Note 2]

In less than 4 months after the summit statement, dramatic change of attitude towards China took a firm place in Tokyo after the replacement of Yasuo Fukuda by Taro Aso (PM 2008-9) and since then the 2008 document was like something that had never existed. Fortunately, although the spats over the disputed islands escalated to the face-off level at the mass media, low-profile diplomatic contacts in one way or the other never halted [Note 3]. Furthermore, with the re-election victory in hand, Abe has been taking constructive measures persistently to soften the so-called tension with China since late 2014 [Note 4].

The foundation for sustaining a long term and stable cooperation between this odd couple, surprisingly, is not their common interest. Rather, it is Japan's complete statehood -- the ability to function as a normal state with full sovereignty. Like using a pair of chopsticks for dining, the prerequisite is that each single stick is tough enough to partner with another. If one of this pair is fatigued or weak, this team cannot help pick up a slice of salmon, let alone the slippery abalone soaked in oyster sauce.

Novels like"Johnny Got His Gun" or"Born on the Fourth of July" may be unknown to most Japanese but, except for a few ultra-rightist groups (whose peers can be easily found in many other normal states including Germany, France, Finland and UK) who merely represent a tiny portion of the population, jingoistic citizens are saliently rare in Japan. Out of"deep repentance for the war", Abe made the pledge in his WWII statement that"any disputes must be settled peacefully and diplomatically based on the respect for the rule of law and not through the use of force" [Note 5]. Such a pledge which has the mass support in Japan [Note 6] has implicitly solidified the government's capability of resisting both domestic and external pressure for being hostile to China, and even the urge to"contain China".

When World War II has been over for 70 years and now almost the whole nation is antiwar and antinuclear, it is unfair to continue to strip Japan of its entitled military capacity of functioning like all other normal states [Note 7]. In the 21st century, the highly civilized Nippon people are in need of the long overdue independence. The Japanese government is able and free to act in the best interest of Japan and to make peace with the world if and only if full sovereignty is returned to this nation so that they are not obligated to act as the proxy or agent or subordinate of anyone.

Abe's WWII statement and Self-Defense bills should be perceived as two steps towards normalization of Japan's statehood. Japan deserves the right and should be welcome by all to join the emerging 'International Society' of peaceful state actors.

See p.308-15 in Samuel P. Huntington (1997),"The Clash of Civilizations and the Remaking of World Order", New York: Touchstone.

The Diplomat,"A China-Japan Breakthrough: A Primer on Their 4 Point Consensus", Nov 7, 2014.