Trump's Visit to the Philippines 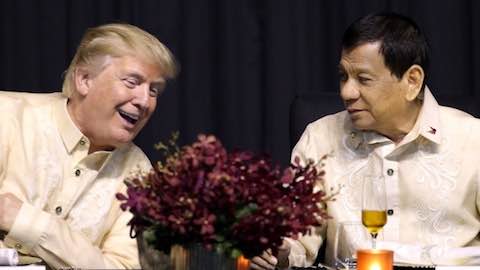 Trump's Visit to the Philippines

The meeting between U.S. President Donald J. Trump and Philippine President Rodrigo Duterte was highly anticipated, and -- for theater -- the two leaders did not disappoint. The two leaders have been engaged in a long-distance kind of bromance going back months.

The meeting between U.S. President Donald J. Trump and Philippine President Rodrigo Duterte was highly anticipated, and -- for theater -- the two leaders did not disappoint. The two leaders have been engaged in a long-distance kind of bromance going back months. On a phone call in the spring whose transcript was later leaked to the press, Trump and Duterte chatted warmly, and Trump has praised Duterte's brutal approach to the Philippine drug war.

The Philippine president seems to appreciate a U.S. leader who has made human rights a low priority in Southeast Asia, and who thus has mostly ignored any criticism of Duterte's undermining of the rule of law. Indeed, the Trump administration has downplayed human rights in all aspects of U.S. foreign policy, including bilateral meeting with foreign leaders and funding for rights and democracy programs within the U.S. government, among other areas.

This approach has, without a doubt, helped restore ties with some top Southeast Asian leaders, although it risks alienating large portions of Southeast Asian politicians. Besides Duterte, other autocratic-minded Southeast Asia leaders also see an opening in the Trump administration's “America First” policies. Leaders from Cambodian Prime Minister Hun Sen to Malaysian Prime Minister Najib tun Razak to Thai Prime Minister Prayuth Chan-ocha are operating, this year, with the gloves off against civil society and all other kinds of opposition. Prayuth and Najib already have visited the White House and met with Trump.

In the run-up to Trump's Asia visit, the U.S. president notably highlighted that he enjoyed warmer relations with Duterte than President Barack Obama had. Trump told reporters in early November that he was proud of his ties to Duterte, even though Duterte is widely criticized for his massive rights abuses. “You remember the Philippines -- the last trip made by a president that turned out to be not so good,” Trump said, according to the Washington Post. “Never quite got to land.” [This statement is not exactly true -- Obama was going to meet Duterte at a regional summit in Laos, not by landing in Manila, and Obama called off the visit, not Duterte, as the Post noted.]

During Trump's meeting with Duterte, the two indeed spent little time speaking about human rights, Then, Trump praised his “great relationship” with the Philippine president. Some administration officials seemed to suggest, before the meeting, that Trump would bring up human rights with Duterte, but it remains unclear whether he actually did. (This disinterest in discussing rights in Manila follows a visit by Trump to Vietnam where he also said virtually nothing about human rights.) White House Press Secretary Sarah Huckabee Sanders said that human rights had briefly come up in the meeting between the U.S. and Philippine presidents, but Duterte denied the issue was broached at all.

What's more, in a press availability with the two leaders, Trump also just ignored reporters' questions about human rights in the Philippines, according to the Los Angeles Times. The U.S. president further said nothing as Duterte called reporters “spies” during a press availability. This was a chilling comment given that Duterte has in recent years warned that journalists could be targeted for assassinations, and that the Philippines in recent years has had some of the highest annual rates of journalists being murdered of any nation in the world. It may help keep the Trump-Duterte bromance going, but as I explore in the next post, the value of that bromance remains limited.

So, the bilateral meeting between U.S. President Donald J. Trump and Philippine President Rodrigo Duterte appears to have gone well, at least on the surface. Earlier in the visit, Duterte actually crooned a Philippine love song at a leaders' dinner, reportedly at the request of Trump.

But while the bilateral meeting appears to have been warm, and the two men have developed a kind of mutual admiration society over months -- partly, it seems, because the U.S. president admires other strongmen including Duterte, Xi Jinping, and many others -- there is only so much that the United States can do to sway Duterte from many of his policy positions. Indeed, in addition to the fact that Trump's meeting with Duterte probably hurt the cause of human rights in the Philippines, it is unclear whether the meeting achieved anything substantial on key issues including the South China Sea.

In fact, according to some news reports, Trump did not even bring up the South China Sea in his meeting with Duterte. Instead, the two leaders talked about the self-proclaimed Islamic State and counterterrorism, among other topics.

Duterte definitely is increasingly realizing that he needs U.S. assistance in counterterrorism, piracy, and other issues related to the Islamic State than he had imagined a year ago. Since the battle in Mindanao this past year, the Philippine armed forces are exhausted, and unprepared for another breakout of major conflict in the south. Duterte has lined up new counterterrorism assistance commitments from Singapore and Australia, but these countries' counterterrorism assistance cannot match the levels of potential aid from Washington.

But on the South China Sea, Duterte seems resolute -- though it makes little sense that Trump did not even bring up the issue in their bilateral meeting. After all, much of the Philippine military and security establishment still hopes to take an assertive approach to the South China Sea, one in line with the position of the previous Benigno Aquino administration. Trump should have at least raised U.S. concerns about Duterte's South China Sea policy.

To be sure, Duterte appears determined to let Beijing dictate terms on the South China Sea, even as the Philippine military establishment tries to convince him otherwise -- and to circumscribe his ability to completely overhaul Manila's South China Sea policy.

It is not wrong that the White House is eager to prioritize counterterrorism in its relationship with the Philippines -- this is an issue where real, win-win cooperation is possible. In addition, Trump and Duterte both share goals of reducing piracy in the Sulu-Celebes Sea, a highly lawless area that is rife with pirates, human traffickers and Islamist militant groups -- including organizations that combine all three activities.

But in the White House's vision of a "Free and Open Indo-Pacific," in which the United States and its partners would defend freedom of navigation, among other interests, it is hard to see how Duterte and his South China Sea approach would fit in. For the past year, nearly every time China has applied pressure on Duterte to take a relatively accommodating position regarding the South China Sea, Duterte has complied.

The Philippine leader, who this year serves as the chair of ASEAN, also has done little to rally ASEAN nations to come up with a coherent position on the South China Sea. He has, in some ways, seemingly been an obstacle on any ASEAN unity on the South China Sea. And, despite Duterte's desire for greater U.S. assistance on counterterrorism and other domestic security challenges, there is little evidence that Duterte plans to move Manila back, even modestly, toward the Aquino administration's tougher approach to the South China Sea.

"Trump's Visit to the Philippines"