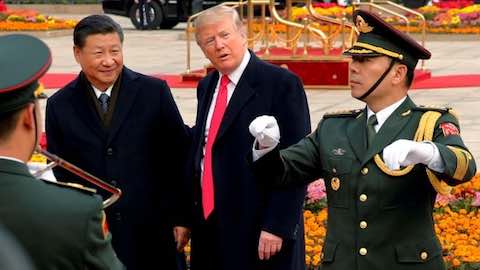 Happy veneer aside, three factors at home are likely to drive the U.S. toward a harder line on China in the months and years ahead.

U.S. President Donald J. Trump's first visit to Beijing was an exhibition of mutual flattery. China rolled out the red carpet for what it termed a 'state visit plus,' replete with unprecedented pomp and circumstance for an American leader.

Trump returned the favor with incessant fawning over Chinese President Xi Jinping, supplemented by extravagant admiration for China. 'Nothing you can see is so beautiful,' he said of a full-dress Chinese military parade he witnessed in Beijing.

The mood contrasted sharply with Trump's heated campaign rhetoric (recall his declaration 'We can't continue to allow China to rape our country'), eliciting a flood of analyses in the Western press that he had reversed course toward a softer approach to Beijing. China's state-run media was all too happy to reinforce this message, billing the summit as locking in a positive path for the U.S.-China relationship.

Don't count on it. Happy veneer aside, three factors at home are likely to drive the U.S. toward a harder line on China in the months and years ahead. Call it the 'Three Ps'.

First, people. Trump is slowly, but surely, filling out his Asia team at the National Security Council, State Department, and Defense Department. Not by accident, there's a near consensus among these political appointees -- shared throughout the administration -- on the need for a more competitive strategy toward China. That will begin to show.

Second, policy development. The Trump administration is finally beginning to get its national security policymaking process up and running. With two big official strategy documents -- the National Defense Strategy and the National Security Strategy -- likely to drop in the coming months, expect to see a portrayal of China as first and foremost a strategic competitor. This doesn't mean the Trump administration will demonstrate perfect coherence or competence on foreign policy, but these frames will drive and inform day-to-day decisions on Asia. When, as anticipated, the administration gets around to focusing on other regional issues beyond North Korea (with Taiwan and South China Sea as leading contenders), the possibility of greater friction with China is far more likely than not.

The third and most important factor driving the U.S. toward a harder line on China is politics. Consider how Democrats and even some Republicans have pulled Trump back to a more moderate position on Iran. With China, it's going to be the opposite. The dominant criticism in Washington -- across the political spectrum -- is that Trump has failed to deliver on China.

Senate Minority Leader Chuck Schumer has accused Trump of being 'nothing more than a paper tiger' on China. Across the aisle, the second-ranking Republican in the Senate, John Cornyn, recently introduced legislation to increase scrutiny of Chinese investments in the U.S., arguing that 'It's time to wake up to the mounting risks' of China's threat to the American economy. And let's not forget that the Bannon-ist, populist, nationalist wing of the GOP first lit this issue on fire in 2016 by blaming China for emptying U.S. factories.

Bottom line: ahead of elections in 2018 and 2020, Trump will feel mounting pressure from all sides to make good on his campaign promise to hold China to account for its unfair trade practices.

But is America even capable of taking on Beijing if it wanted to?

You don't have to search far these days to find doomsday predictions of American decline. Eurasia Group's Ian Bremmer stole the mid-November cover of TIME magazine to argue the contest is already over, proclaiming that 'China Won'. Sensing a similar reversal of fortune, former Foreign Policy chief editor David Rothkopf tweeted upon the President's departure to Asia that 'Trump about to make history as first POTUS who had to travel all the way to PRC to meet world's most powerful man.' Fair enough: After all, who could fail to compare Xi Jinping's Davos-friendly odes to globalization with Donald Trump's protectionism and damaging withdrawal from the Paris climate deal and the Trans-Pacific Partnership (TPP) trade agreement?

Yet the reality in Asia betrays a far more complicated picture. For starters, in spite of (or, perhaps, because of) concerns about Donald Trump, the most important happenings while Trump was in Asia were demonstrations of resistance to -- not willing or reluctant acceptance of -- China's growing influence. On trade and investment, the remaining eleven members of the TPP managed to move forward on the deal without the U.S. Washington's absence was notable and costly, but more significant is the collective desire in the region to avoid a China-led economic order.

Similarly, for the first time in a decade, senior officials from Australia, India, Japan, and the U.S. met as a 'Quad' to re-energize cooperation among the region's leading democracies. Again, little nuance that this is anything other than an effort to generate alternatives to a Sino-centric future.

It bears remembering that Xi Jinping may be consolidating power at home, but remains deeply unpopular overseas. Pew Research polls, often used as evidence of Trump's low ratings globally, have also shown that the world has barely more confidence in Xi, leaving the Chinese President about as popular as Vladimir Putin. Despite the billions of dollars the Chinese government has spent trying to burnish its leader's image abroad, Xi's numbers are in the basement compared to respected figures like Angela Merkel and Barack Obama. This all suggests it is premature to declare China victorious while the region and the world are rejecting both its leadership and its leader.

Finally, let's remember that, despite Trump's corrosive effect, the foundations of American power remain strong. The U.S. economy is still the largest and most advanced in the world, with the best universities, the most capable military, strong demographics, and a vibrant civil society. By comparison, take your issue area -- economics, politics, environment, energy, demographics, ideology -- and China's position looks more perilous than dominant.

China is no doubt a force to be reckoned with, but Trump has the wherewithal to play hardball on trade, Taiwan, or the South China Sea should he choose. Donald Trump, of course, is the ultimate wildcard, and predicting the future of U.S. foreign policy under his watch is risky business. Nonetheless, all signs are now pointing toward a harder U.S. line against China, regardless of either the royal treatment Trump received in Beijing or his 'great chemistry' and 'very good relationship' with Xi.