Troop Levels on the Korean Peninsula 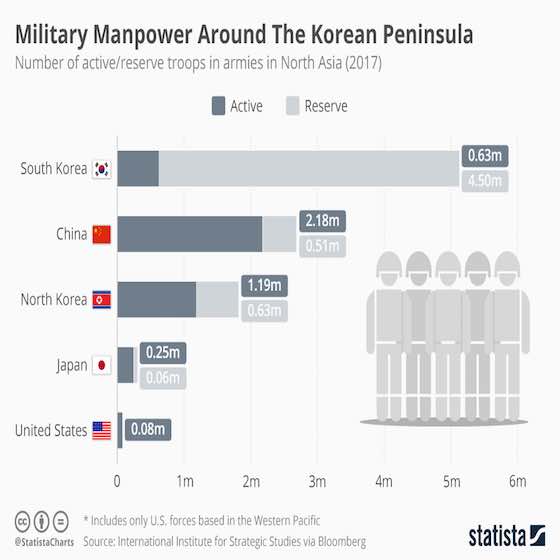 Troop Levels on the Korean Peninsula

This chart shows the number of active / reserve trooops in armies in North Asia and the Korean Peninsula.

If war does erupt on the Korean peninsula, the level of destruction would be unfathomable.

North Korea's army has an estimated 32,000 artillery pieces, with a substantial number directed at Seoul. A 2012 study by the Nautilus Institute for Security and Sustainability concluded that an initial artillery barrage by the North concentrated on military targets would kill 3,000 troops while an attack on civilians could kill up to 30,000 people.

According to International Institute for Strategic studies data published by Bloomberg, China's army has the most active-duty troops in the region with 2.18 million, ahead of North Korea's 1.19 million. In the event of hostilities, they could also call on 510,000 and 630,000 reservists respectively. South Korea has a much smaller active-duty army with 630,000 troops. However, Seoul can also muster up a huge number of reserves, some 4.5 million.

"Troop Levels on the Korean Peninsula"