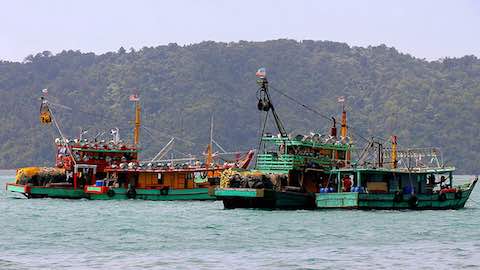 By Peter Chalk (The Strategist)

The tri-border area (TBA) between Malaysia, the Philippines and Indonesia in the Sulu and Celebes seas has witnessed a spate of increasingly audacious hijackings.

By the end of June 2017, 23 actual or attempted incidents had occurred, with 59 crew members abducted. Of these mariners, 30 have since been released, 9 rescued and 2 killed. As of this writing, 18 remain in captivity.

Regional authorities have tied many of the incidents to local pirate syndicates, with the assumed objective being to steal cargo or extort ransoms for the abducted mariners. However, there's also widespread speculation that extremists from the Abu Sayyaf Group (ASG) have played a role given their presence in the region, maritime heritage and acknowledged responsibility for beheading at least two Indonesian captives. This is worrying because, prior to his death at the apex of the 2017 Marawi crisis, Islinon Hapilon commanded the bulk of these militants. One of the most wanted men in the Philippines, he had pledged repeated oaths of allegiance to Abu Bakar al-Baghdadi, the leader of Islamic State (IS), and in 2016 was anointed his chief emissary in Southeast Asia.

If in fact ASG fighters are operating in the TBA, it's worrisome for two fundamental reasons. First, the hijackings are directly threatening the safety and viability of a trade and navigation corridor that sees around 100,000 ship transits a year, transporting over 55 million metric tons of cargo worth in excess of US$40 billion. Disrupting this traffic -- there are already indications that shipowners are switching to alternate routes -- would have significant commercial reverberations, both regionally and internationally. This would fit 'well' with the global Islamist view that the best way to cripple the United States and its allies is by provoking a severe economic crisis in the West.

Second, it could presage the re-emergence of the region as a staging area for trans-border militant activity. The TBA has historically acted as a logistical rear base for prominent jihadi groups such as Jemaah Islamyya. Should that reoccur with respect to IS, it would have direct implications for the wider security of Southeast Asia.

Plainly alarmed at the deteriorating situation, Malaysia, the Philippines and Indonesia have entered into several agreements to better safeguard the waters of the Sulu and Celebes seas that fall within their respective spheres of jurisdictions. In May 2016, the three governments signed an accord to initiate limited trilateral maritime policing over the TBA. Last-minute issues associated with finalising necessary standard operating procedures and supporting infrastructure delayed the actualisation of patrols, although a maiden flotilla was eventually launched from Bangao in the southern Philippines on 19 June 2017.

Manila, Kuala Lumpur and Jakarta have also arrived at an informal understanding that, if requested, a qualified right of hot pursuit to intercept a suspect pirate or terrorist vessel will be granted. The Indonesians first insisted on including this provision, and the Philippines and Malaysia have since clarified the conditions under which it will be permitted. First, the pursuing ship must immediately inform the relevant maritime authorities of the coastal state that it seeks to enter. Second, any subsequent interdiction must be executed in coordination with those agencies. Under no circumstances are unilateral operations sanctioned.

Finally, there have been some tentative moves to establish institutionalised communication channels to share information. To that end, the three littoral states plan on setting up national focal points connected by a common hotline to facilitate intelligence coordination and dissemination. It is envisioned that these data command posts will be located in Bongao (on the southeastern tip of the Philippines), Tawau (in eastern Malaysia) and Tarakan (in North Kalimantan, Indonesia).

The initiatives undertaken by the Philippines, Malaysia and Indonesia represent an important and welcome development in sub-regional efforts to address transnational crime and terrorism. However, they confront a number of challenges. First, ongoing preoccupations with national sovereignty have placed an in-built limit on cooperation. It is noteworthy, for example, that the patrol agreements might allow coordinated patrols, but there's no mention of joint -- much less combined -- manoeuvres in domestic waters, which would imply a far deeper level of collaboration.

Second, while Malaysia has a relatively proficient and equipped Maritime Enforcement Agency at its disposal, both the Philippines and Indonesia suffer from a chronic lack of patrol and surveillance assets. They're also both hamstrung by an incoherent bureaucracy of agencies vested with responsibility for safeguarding their waters. In many ways, these deficiencies stem from ongoing 'sea blindness' in the two countries: despite the relevance and importance of the maritime realm, national security priorities continue to reflect the predilections of their respective militaries and concomitant preoccupations with land-based operations.

Third, Indonesia -- which under the administration of Joko Widodo has set itself up as a pivot for Southeast Asian littoral security -- has failed to lead. The president's much-touted global maritime fulcrum (GMF) has yet to materialise in any meaningful sense. Indeed, apart from establishing an organisational shell for a coastguard coordinating agency, the GMF essentially remains stalled in the conceptual stage. Again, that seems to be a product of the army's bias towards land-centric threats.

Finally, lingering sources of territorial tension continue to complicate interstate relations in the tri-border area, notably between Malaysia and the Philippines over Sabah and Malaysia and Indonesia over the Ambalat Block. Until these nettlesome border issues are settled, the prospect for even a marginally integrated mechanism of sub-regional maritime security emerging in the Sulu and Celebes seas will be questionable at best.

Peter Chalk is a subject matter expert on maritime security with the Center for Civil Military Relations at the Naval Postgraduate School in the United States. Image courtesy of Flickr user stratman.