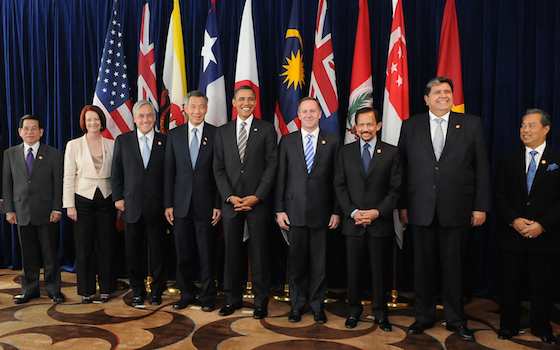 Tell you what: Why don't we just effectively erase all the borders in Asia and turn it into one giant pool of exploitable labor, because that's exactly what this agreement would achieve. The won't say that, though. Instead, the Obama administration is promoting the idea that the TPP will result in higher labor standards.

"The president has always made clear that he will only support trade agreements that include fully enforceable labor standards, which we are pursuing in TPP," according to a February statement from the . "TPP will offer new tools to fight exploitative child labor and forced labor, deter employment discrimination, and will embed fundamental labor standards in our trade agreement with Mexico and Canada."

What utter nonsense. The U.S. government isn't even capable of following through on such guarantees at home. In fact, its policies promote the precise opposite.

The whole idea of temporary foreign worker programs in the United States, Canada and other developed countries is to establish a legal mechanism for importing and subsequently exploiting foreigners in domestic labor markets. They're forced to work long hours for low pay, differentiating them from the entitled teenagers who would otherwise be filling these positions. Foreign workers are effectively tethered to their jobs, lest they face unemployment and the loss of their immigration status. Sure, they can probably file a grievance with some government agency, but even if it's addressed, the aggrieved worker is apt to be cut loose.

Are we supposed to believe that governments of these same developed nations are going to suddenly care about labor standards in foreign nations?

Who's going to police labor standards in other TPP countries -- U.S. government workers? Civil servants in America are going to ensure workplace compliance for American firms operating in Indonesia and Bangladesh? Really? That's already worked so well in China, where a major supplier of installed suicide nets around employee dormitories after a number of workers jumped to their death.

Whatever President Obama is telling Americans, he can't guarantee a thing in this regard.

International trade and foreign direct investments are positive things -- if done right. Free trade and comprehensive duty-free access should only be conducted between parties that are relatively equal in all respects, and this is virtually impossible to ensure across so many nations with different labor standards. Besides, when a company from a developed nation sets up operations in a foreign country with cheaper labor and lax standards, the cost of doing business should, in fact, include some customs and excise levies.

Granted, foreign direct investments by American companies in Asia are important to offset the ever-increasing influence of China, but that cannot consist entirely of outsourcing American operations abroad. Such operations should complement the domestic workforce, not replace it -- but history suggests that this rarely ends up being the case.

If Obama were truly concerned about America bleeding jobs, he wouldn't be looking to create jobs in Asia, but instead tackling the taxation, red tape and labor issues in the U.S. that render America a less attractive place to do business than some nations.

It's not a question of gutting labor standards in developed nations, but it's hard not to see that the pendulum has swung too far. Unions now exist to justify their own existence. In France, for example -- the Mecca of unions in the developed world -- labor unions at stores such as Sephora and Virgin (now shuttered across France) have made a big deal over late-night (9 p.m. to midnight) work hours, even though the workers themselves were keen to work those hours. Where there are people who are passionate about their jobs and genuinely want to work, unions have stepped in to stop the love-in between employer and employee, and have worked relentlessly to enshrine systemic discrimination against entrepreneurial contractors.

It's these sorts of things that make cheap labor and foreign markets attractive. The focus should be on improving the U.S. regulatory system so that the outsourcing of American jobs to places with appalling labor conditions doesn't look so enticing.