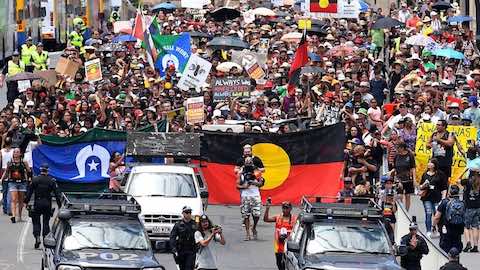 Thousands of Australians staged protest marches demanding the date of Australia Day, Jan. 26, be changed as it celebrates the arrival of white settlement and the beginning of injustices suffered by the country's disadvantaged Aborigines.

Tens of thousands of people - many wearing the black, yellow and red colors of the aboriginal flag - gathered in Melbourne, The Age newspaper reported, while thousands more took to the streets of Sydney, Brisbane, Adelaide and Perth.

For many Aborigines, who trace their lineage on the island continent back 50,000 years, Jan. 26 is "Invasion Day", the anniversary of the beginning of British colonisation of their lands and their brutal subjugation.

"I'm here to commemorate all the aboriginal people who were murdered during the first stage of settlement," protester Neville Scarlett told The Age.

While the rallies were mostly peaceful, in Sydney a 20-year-old man was arrested and a police officer and protester were injured, New South Wales state police said.

Prime Minister Malcolm Turnbull said he did not support changing the date of Australia Day, which is celebrated as a public holiday with festivities from fireworks over Sydney Harbour and citizenship events to ancient aboriginal ceremonies.

"Everyone is entitled to a point of view but I think most Australians accept January 26 as Australia Day," Turnbull told reporters in the national capital Canberra.

The protests come at a time when right-wing nationalist politics is on the rise in Australia, similar to the United States and Europe, and there is little political appetite to tackle aboriginal rights issue.

Aborigines only gained citizenship in 1967 and a vote on whether to recognise Aborigines in the constitution as the country's first people has been on hold for years.

Australia's 700,000 or so indigenous Aboriginal and Torres Strait Islander people still struggle with the impacts of colonisation and track near the bottom of the country's 23 million citizens in almost every economic and social indicator.