The Grim Scale Of The Rohingya Crisis 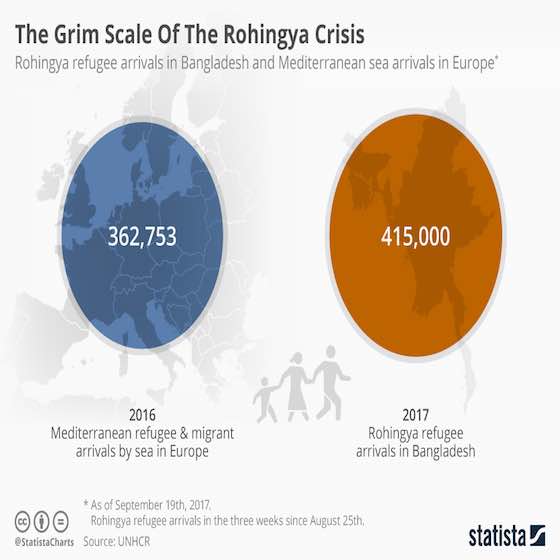 The Grim Scale Of The Rohingya Crisis

French President Emmanuel Macron has condemned attacks on Myanmar's Rohingya Muslim minority, saying they amount to 'genocide'. 415,000 Rohingya refugees have crossed into Bangladesh, 225,000 of whom are living in makeshift shelters.

The grim scale of the crisis can be seen from the infographic above.

In response to the ongoing military operation against the Rohingya minority in Myanmar's Rakhine State, the United Nations High Commissioner for Human Rights, Zeid Ra'ad Al Hussein, has denounced the "brutal security operation" as a seemingly "textbook example of ethnic cleansing".

After an attack committed by a Rohingya insurgent group on August 25 which claimed the lives of twelve people, militia groups, security forces and the army have responded by targeting the entire Muslim minority living in the country, leading to reports of killings and the forced displacement of hundreds of thousands of people, many over the border to Bangladesh.

As our infographic shows, the International Organization for Migration estimates that as of September 10, around 313,000 Rohingya have arrived in neighboring Bangladesh, creating a humanitarian crisis. According to Inter Sector Coordination Group, in 2017 alone, a total of 77 million USD would be required to save the lives of 300,000 people in the area. The funding would be spent on 60,000 shelters, 15,000 latrines, 4.5 million liters of water per day and 1.5 million kilograms of rice per month as well as other crucial forms of support such as healthcare. 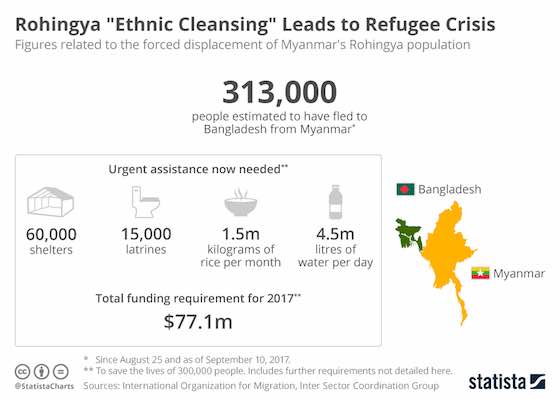 "The Grim Scale Of The Rohingya Crisis"