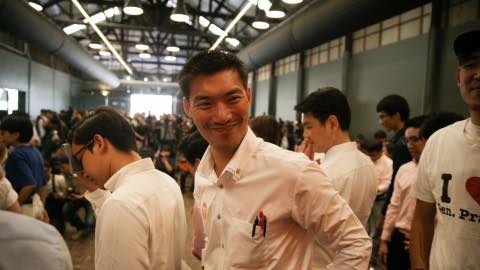 A plethora of parties register, but will politics actually change? With elections in Thailand seemingly slated for early 2019, could an Emmanuel Macron--like figure emerge in the kingdom?

Although Thailand's ruling junta has put off elections for years, since seizing power in its May 2014 coup, it is now claiming that elections will be held in early 2019. Some observers, such as the astute Shawn Crispin of Asia Times, believe that the junta well may delay the election again, in order to prevent any potential transfer of power; it could use the excuse of needing to delay until a formal royal coronation for King Rama X, for instance. Or, it could use the pretext of continuing instability in the kingdom -- protests against junta rule or other incidents -- to remain in power.

However, the military did recently allow political parties to begin to register for a future election, and around forty political parties have registered already. One of the parties that registered and received attention is the Future Forward Party, led by a wealthy young Thai auto parts magnate, Thanathorn Juangroongruangkit. He claims that his party will focus on progressive policies and will smooth the way for a return to democracy. He suggests the party will be a new, third force that could lift Thailand out of its longstanding political divides between Thaksin Shinawatra's Peua Thai party and the military and its allies in Bangkok. Reuters notes that Thanathorn has "said he hoped to appeal to younger voters and disenfranchised citizens."

The buzz around the Future Forward Party, which has received substantial media coverage by Thai outlets in Bangkok, does suggest that some Thais are looking for a new political figure who might move beyond existing deadlocks. Perhaps they are looking for a kind of Thai Emmanuel Macron, who can somehow bring the country together after more than a decade of political conflict, and who is beholden neither to the military and royalist elites nor to the Puea Thai party and the Shinawatra family.

Is Thanathorn that person, and could a Macron-like revolution happen in Thailand? It is unlikely. His party, like all political parties, is not yet allowed to reveal its policy positions, and it remains unclear what he will actually stand for. Some Thais suspect that the leader of the new party is actually a Puea Thai candidate in disguise, although he denies that. (He has been praised by some members of the Puea Thai party, and his uncle was a senior member of Thaksin's party.)

More important, unlike in France, a real democracy where Macron was able to truly build a new movement, it would be virtually impossible for any newcomer in Thailand to build a political movement without taking steps to woo both Puea Thai and placate the military and royalist elites. In so doing, concessions to the military would have to be significant, or senior army leaders likely would not allow any new political force to emerge.

In addition, Puea Thai leaders and Democrat Party leaders both likely would block any new movement from recruiting in many parts of the country, and there is limited evidence that a new movement would have traction in the south, the Democrats' stronghold, or the north and northeast, the stronghold of Puea Thai. There is, as of yet, no evidence to suggest that Future Forward, or really any other new party, could build a grassroots movement throughout Thailand. Internal polling taken by the military government has suggested that Puea Thai remains the strongest party in the country. In recent weeks, Thaksin and former Prime Minister Yingluck Shinawatra have held meetings in Singapore and Hong Kong with Puea Thai leaders, a sign that their party, and its powerful grassroots movement, appears to be gearing up for a campaign and would be uninterested in ceding voters to some new force.

What's more, the new Thai constitution is designed to ensure that no powerful Macron-type figure -- either from Puea Thai or from some new party -- could ever pull a Macron, and amass massive support and extensive powers. With all the new parties running, the most likely scenario for a future election -- whenever it happens -- remains a divided lower house of parliament with many small and mid-sized parties each controlling a handful of seats. Such a situation would lead to a relatively weak lower house and an unwieldy governing coalition, even if the Future Forward Party grabs a sizable share of seats; the only way the lower house would be able to wield significant powers would be if one party won a majority of seats.

An unwieldy coalition, which cannot agree on a leader, could pave the way for a scenario that would be more of the same. In such a situation, current junta leader Prayuth Chan-ocha could be appointed as prime minister under a provision of the new constitution that allows for an unelected prime minister. And, Thailand's political deadlock would surely continue.

Photo: hanathorn Juangroongruangkit, the founder of Thailand's Future Forward Party, smiles during the launch of the party in Bangkok, Thailand. Athit Perawongmetha/Reuters