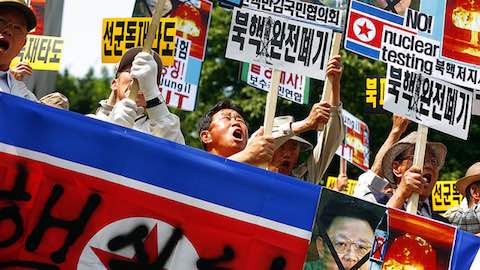 Would South Korea ever go the nuclearization route like North Korea?

On the heels of North Korea announcing that it had made nuclear warheads small enough to launch on a missile, South Korea has learned that one of those missiles, the Rodang, is capable of reaching South Korea. Whether or not that is correct, in the New York Times, Choe Sang-Hun reports:

&ellips one senior United States military commander, Adm. William E. Gortney, said at a Senate hearing last month that it was a"prudent decision" to assume that the North"has the capability to miniaturize a nuclear weapon and put it on an ICBM."

Our studied skepticism of North Korea's capabilities is not in our long-term interest. We should be in the business of seeking moratoria in North Korea on nuclear and missile tests, not daring Pyongyang to do more.

How should we go about that? Lewis on how not to:

By setting the hopeless goal of denuclearization and insisting upon unstated preconditions the United States is mostly giving itself an excuse not to do anything.

As odious as it may seem, it is time to re-engage with the regime."While there are currently no good or viable options to rolling back the North's nuclear program," writes my colleague Philip Yun,"a multilateral diplomatic approach that addressed some of its strategic interests has a chance of at least freezing activity."

In the National Interest, Eric Terzuolo advises applying the new U.S. policy toward Cuba toward North Korea, as well.

In Havana, the president admitted the failure of long-standing U.S. policy, an uncharacteristic move for a U.S. political leader:"What the United States was doing was not working. We have to have the courage to acknowledge that truth." … Why shouldn't we"own" our failure vis-à-vis North Korea in the same way?… In Havana &ellips President Obama emphasized the need to put the past behind us, and to find common ground between erstwhile adversaries. … Perhaps what was lacking in our approach to North Korea was respect and reassurance. &ellips As with Cuba, we should be able to find something positive to accentuate in our discussions with Pyongyang.

In other words,"perhaps we just need to 'contextualize' North Korea's hostile gestures correctly, and try to view things from their perspective." Terzuolo dreams of"a reconciliation 'trifecta'" that reaching out to North Korea, along with the nuclear deal with Iran and the opening with Cuba, would constitute for the Obama administration,

In the interim, as John Feffer writes in his latest piece at Foreign Policy in Focus, Should South Korea Get the Bomb?, polls show that the majority of South Koreans, as well as some of the conservative media, are in favor of their country developing a nuclear-weapons program. It would probably, in view of its technological prowess and presumed preliminary research, be a piece of cake. That is, if South Korea were willing to expose itself to much of the same international enmity as North Korea. Developing nuclear weapons would make South Korea a rogue nuclear state, like the other few states that have developed nuclear weapons in the years since the nuclear Non-Proliferation Treaty was ratified in 1968.

For others in South Korea, the nuclear option is just to scare China into putting more pressure on North Korea."I don't think that South Korea actually wants nuclear weapons," said Park Syung-je of the Asia Strategy Institute in Seoul told The Washington Post."It's a way of saying to the Chinese that 'if you don't cooperate on North Korea, then we're going to get nuclear weapons of our own.'"

The possibility that the Islamic State could get its hands on nuclear material continues to increase the more time goes by. Similarly, the West has allowed the North Korean nuclear situation to fester. If the West, led by the United States, can't summon up the diplomacy needed to defuse both situations, one or the other will blow up in our faces.