Reworking Palm Oil Welfare from the Grassroots in Indonesia 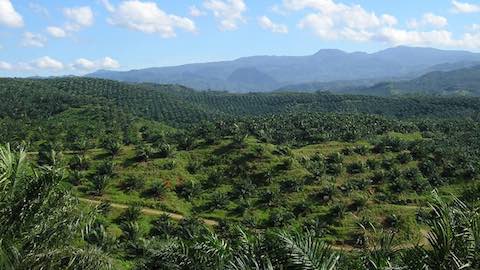 Reworking Palm Oil Welfare from the Grassroots in Indonesia

Palm oil workers are presented the challenge of formulating a collective agenda and political strategies. They currently do not have the capacity to do so.

Indonesia's palm oil plantation industry is facing long-term challenges stemming from complex socio-environmental problems along the commodity supply chain. The palm oil upstream industry, where fresh fruit bunches are produced, is a site of intense political struggle for local and transnational actors where land has become a very strategic production factor. This is also an arena where welfare is reliant upon a globalizing commodity. More efforts are needed to cope with grievances voiced by farmers, workers and local communities who mostly suffer directly from political disadvantages in the social relations of commodity production.

The ascendency of palm plantations in Indonesia to produce palm oil is taking place at the expense of changing land use for other purposes including industrial plantation forest, rubber plantations and peat lands. Since 1997, massive haze from land burning in Kalimantan, Sumatera and Papua has accompanied the establishment of new plantations. This has had a range of detrimental impacts including rising CO2 emissions, biodiversity loss and forest degradation across the archipelago.

The detrimental environmental effects of palm oil production were brought into international public attention when exposed by various non-governmental organizations. Unregulated industrial practices in the plantation sector has thus perpetuated a negative image of palm oil among governments in developed countries that have high environmental standards in regulating their domestic markets. In response to stricter non-tariff market barriers, the Government of Indonesia has actively lobbied foreign governments to relax their environmental standards and to recognize Indonesian regulation on the industry, thereby allowing crude palm oil from the country to enter foreign markets. The Indonesia Palm Oil Business Association (GAPKI) has called for government lobby to cope with trade barriers implemented by the European Union to crude palm oil from Indonesia. The strategic economic values that the industry offers are therefore undermined by the inability of the current supply chain governance to address social and environmental grievances.

Thorn in the flesh

Government-sponsored land expansion projects for new plantations have taken place intensively since the Suharto era, particularly through the introduction of nucleus-plasma schemes that divide land between dominant state-owned enterprises and smallholder farmers. It was assumed that the scheme allowed national players to increase their industrial productivity while allowing grassroots actors to take part in welfare creation and enjoy redistribution of profit.

In the Post-Suharto Era, there has been stronger national policy framework for privatization and liberalization that allows foreign companies to invest in the upstream, especially since the introduction of the new Plantation Law in 2004 and Investment Law in 2007. The sector has since then experienced more rapid capital restructuring as a result of these political developments, combined with a massive influx of foreign direct investment supported by international financial institutions.

Industrial restructuring has meant that only 41 per cent of national plantation area remains in the hands of smallholders. Isn't it supposed to represent the prospect of grassroots welfare? It is undeniable that the upstream industry provides significant opportunities for employment. Currently, it entails 1.5 million independent and contract farmers and their families. Contract farmers belong to partnership schemes with private and state-owned corporations, be they national or transnational. Independent farmers, meanwhile, rely on individual connections with local palm oil milling, with whom their relation is regulated more flexibly on the basis of regular supply of fresh fruit bunches. The industry also accommodates around 8 million casual workers whose livelihoods depend on palm oil production.

The sources of welfare for farmers can be traced to the utilization of land under the contract farming system, where there has been a gradual change in terms of access and control over land use. Under the recent partnership system, however, farmers are not the main holders of land use rights. They work mainly as laborers, as land use rights are licensed to plantation operators. Government regulation allows the renewal of plantation business licensing up to 95 years, leaving very limited space for land restructuring after communities' access to land use is reallocated to operators at the early establishment of the plantation. Farmers usually receive income by working as plantation laborers during the processes of seeding, planting, maintenance and harvesting. Apart from that, they must find their own sources of livelihoods to meet the needs of their household.

The experience of smallholder farmers in Sekadau District, West Kalimantan, revealed that farmers and plantation workers suffer from the negative consequences of asymmetric economic interdependence. In the absence of stringent industrial regulation, farmers are often subject to misconduct by the plantation operators. This happens, for example, in fresh fruit bunches grading process where traders apply unfair pricing, subsequently reducing potential incomes. In dealing with such problems, farmers are still facing the difficulties to organize complaints to transform their grievances into credible political articulation. Farmers are also not always aware of the availability of mechanisms at various levels that may facilitate and respond to their complaints. Rather than organizing to articulate their concerns, it is often done so in an informal and fragmented way such as using personal channels to contact local politicians. The presence of a palm oil smallholders union is yet to be a reliable source of political action. Many violations of government regulation also continue to go unsanctioned.

In many cases, farmers are also unfamiliar with the conditions of contracts that are supposed to protect their rights in relation to plantation companies. The details of the contracts are not subject to corporate disclosure policy. This is unsurprising if the accumulation of economic benefit from oil palm planting and its redistribution system is highly dominated by political decisions taken by plantation operators, leaving farmers with a very limited space to voice their grievances.

There are currently two key mechanisms of intervention in response to managing palm oil farmer and worker grievances in Indonesia. The first one is formal government regulation. Indonesian Sustainable Palm Oil (ISPO), a government-driven certification process that was implemented in 2015 to improve market compliance. This is a compulsory mechanism that regulates all plantation companies operating under Indonesian legal jurisdiction. There is, nevertheless, an absence of a clear coordinating mechanism among various government agencies to address people's grievances before it leads to violent conflicts in many localities.

The second one is multi-stakeholder forum that allows various actors in the supply chain to engage in a collective process to develop socio-environmental standards. The Roundtable on Sustainable Palm Oil (RSPO) represents the largest forum that connects various actors in the global palm oil supply chain. Different from ISPO, RSPO relies on the voluntary commitment of the private sector to comply with collectively established standards. Indonesian Palm Oil Pledge (IPOP) is another scheme of which membership includes major oil palm plantation corporations operating in Indonesia, such as Asian Agri, Astra Agro Lestari, Musim Mas, Wilmar and Cargill.

Moreover, NGOs and palm oil companies have also developed the Palm Oil Innovation Group (POIG) that applies standards to break the relationship between palm oil industry and deforestation. This has been treated as a complementary scheme to RSPO. Through these market-based certification schemes, plantation companies engage in a direct consultation mechanism that is expected to connect them with local communities and address grievances in their commodity supply chain. The process often involves NGOs assuming advisory roles in the formulation of specific standards with clear targets and socio-environmental commitments.

What are the weaknesses of these state-driven and market-driven schemes when it comes to reaching the roots of grievances? These schemes assume that there are clear connections between actors at the grassroots level where grievances are produced and the relevant parties who engage in the arbitrary process, such as the dispute settlement process facilitated by RSPO. It also assumes farmers who raise complaints are informed and have credible access to information regarding their specific rights and obligations in the production process.

These assumptions are not always true. Firstly, information asymmetry that develops in the relation between farmers and plantation workers and plantation companies is often subject to exploitation by the latter. Neither government regulation or market mechanisms create sufficient pressure or incentives to push for information disclosure as such concerns are absent from the standardization and certification regimes.

Secondly, such mechanisms also assume that farmers and plantation workers are able to organize themselves in a way that allows them to create stronger political claims and pressures. In fact, there has been lack of communication, cooperation and thus organization among farmers and workers in most, largely-remote localities, thus hindering the formation of a common agenda. This can also be associated with lack of equivalent agendas in transforming socio-environmental grievances into collective action. If not addressed over the long term, farmers and workers may continue to rely on very limited channels in voicing their demands, which does not enable them to fulfill their socio-economic rights substantially. This will serve to entrench existing poverty and inequality in remote areas of Indonesia's provinces.

As Indonesia has rapidly undergone democratization since 1998, palm oil farmers and plantation workers are presented the challenge of critically formulating a collective agenda and political strategies. They currently do not have the capacity to do so. Borrowing Andrea Cornwall's term, linking invented spaces and invited spaces of citizen participation will provide broader political opportunities for these politically disadvantaged groups in their struggle for sustainable palm oil welfare.

"Reworking Palm Oil Welfare from the Grassroots in Indonesia"