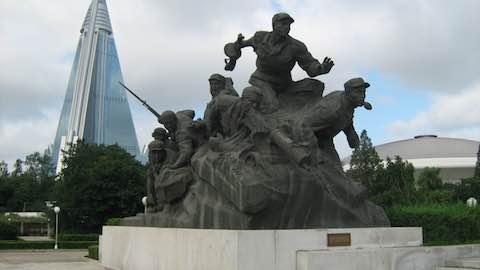 If you want to know how a North Korean policy analyst views the Korean War and its aftermath, then Jong Nam Hyok is your man. In the following piece, he argues that it's high time for the US to abandon the armistice that has existed on the peninsula for over 62 years and conclude a lasting peace agreement with North Korea.

It is noteworthy that when the counterattack by the Korean People’s Army turned tables in the wake of the war it provoked by instigating the south Korean puppet army, the United States raised the veil as the wire puller and took over and exercised operational command over the south Korean land, naval, and air forces from the Syngman Rhee regime over the whole period of the war. The US military personnel mobilized for the Korean War were numbered at about 1,408,000 which far exceeded the number of military personnel from 15 satellite countries and south Korea, which respectively stood at about 79,000 and over 570,000.

The US generals acted as representatives in the talks for the Korean ceasefire and the Armistice Agreement was signed by US Army Gen. Clark, US commander-in-chief of the armed forces in the Far East and US Army Lt. Gen. Harrison, not representatives of the UN or any other country.

That the US is the very one that has been posing the gravest threat to the survival and development of the DPRK since the end of the war further substantiates the fact that the US is directly responsible for concluding a peace agreement with the DPRK. The United States has for decades pursued a hostile policy – the harshest ever in its history – toward the DPRK and sought to politically obliterate, economically isolate, and militarily stifle the latter. As early as the 1950s, the United States ignited the Korean War with the aim of destroying the DPRK by the use of force.

In the late 1960s, the United States kicked off US-south Korea joint military exercises featuring surprise landing and capture and airlifting operations targeting the DPRK. Since then the US has continued to update and elaborate a series of north-targeted nuclear operational plans with the objective of toppling the DPRK’s leadership and occupying the northern part of the Peninsula at a stroke. Under those plans, the means for preemptive nuclear strike such as aircraft carrier fleets and strategic bombers have frequently been dispatched to the Korean Peninsula.

The US has also employed political and economic means along with military instruments in their persistent pursuance of its strategy to undermine our State. The US seeks to tarnish the image of our Republic by raising the alleged “Human Rights issue” while imposing toughest economic sanctions on the latter for its differing ideology and ideals and for its alleged development and proliferation of weapons of mass destruction.

The Declaration for developing inter-Korean relations and ensuring peace and prosperity adopted at the inter-Korean summit meeting in 2007 states that the north and the south shared the understanding about the need to put an end to the existing armistice mechanism and build a lasting peace mechanism and agreed to cooperate with each other in the efforts to push forward the issue of arranging the meeting of the heads of state of three or four parties directly concerned on the Korean Peninsula and declaring an end to the war.

Given the fact that it is a party to the Korean War and to the issue of reunification, one cannot say that south Korea is totally irrelevant to establishing lasting peace mechanism by way of replacing the Armistice Agreement with a peace agreement. Nonetheless, under the circumstances where the US stations its huge armed forces in the south targeting the DPRK and takes hold of wartime control over the south Korean armed forces, it is meaningless to give precedence to north-south talks on signing a peace agreement.

It stands to reason that, to put an end to the unstable state of ceasefire and secure lasting peace by way of replacing the Armistice Agreement with a peace agreement, the US should be the first to come out to sign a peace agreement.

Significance of replacing the Armistice Agreement with a peace agreement

Once the state of ceasefire between the DPRK and the US is terminated and a peace agreement is reached, a precarious ceasefire regime can be replaced with a lasting peace regime and it would, in turn, lead to fundamental removal of risks of war on the Korean Peninsula. An armistice agreement technically means a temporary suspension of combat operations by warring parties, and even if the armistice agreement is duly observed, it does not imply that the state of war has actually terminated and durable peace has settled in.

Furthermore, given that the Korean Armistice Agreement and the subsequent ceasefire regime has completely lost its binding force and is no longer in effect due to the US during the past 60 years, signing a peace agreement becomes all the more urgent.

The US intentionally refused to implement Article IV of the Armistice Agreement which stipulates that a higher level political conference shall be convened to seek to secure lasting peace in Korea, and systematically shipped ultra-modern war equipment including nuclear weapons into the whole territory of south Korea. Worse still, in the 1990s, the US appointed a general of the south Korean puppet army, which is neither an actual signatory nor a nominal party to the Armistice Agreement, as the senior representative to the Military Armistice Commission, thus completely breaching core provisions of the Armistice Agreement.

In particular, the US has been hell-bent on aggressive military provocations against the DPRK for decades under the pretext of “defense-oriented exercises,” in flagrant violation of the basic spirit of the Armistice Agreement: a complete cessation of all hostilities by all armed forces under their control. The venue of such military movements, the size of the forces mobilized, and the contents of constantly renewed, north-targeted operational plans vividly indicate that those exercises are dangerous hostile acts aimed at occupying the northern part of our Republic by mounting a large-scale surprise attack at any time.

It is a universally acknowledged international practice and the requirement of any international law that if an agreement between any countries becomes essentially nullified due to one party, such an agreement would no longer be valid and subsequently, there would be no reason for the other party to stay bound by that agreement.

At present, the central boundary line of the ground military demarcation line drawn by the Armistice Agreement is barely retained. However, the August incident of last year teaches a lesson that any accidental incident can lead to a full-scale nuclear war in this region where huge forces of warring parties are standing in acute confrontation.

The uncontrollable and dangerous situation, in which the DPRK and the US remaining technically at war consider themselves no longer legally bound in terms of use of force against each other, can be alleviated only when the Armistice Agreement that exists only in name is replaced with a peace agreement.

The danger of a war can be completely averted only when the US withdraws its troops stationed in south Korea, quits reinforcing its armaments, and suspends hostile military acts such as joint military drills as a result of the conclusion of a peace agreement.

In the past, a number of countries were engaged in a war with the United States, and in the long run, they brought the war to a complete halt and secured permanent peace by way of concluding or proclaiming a peace treaty or similar documents. Like the Korean War, the Vietnamese War was a clash between the US strategy toward Asia and the interests of the Vietnamese people and, at the same time, a confrontation between two conflicting ideals. Vietnam was of geopolitical significance as much as Korea for the United States in terms of realizing its strategy for domination over Asia. However, unlike the Korean War, the Vietnamese War came to an end with the signing of the peace agreement. As seen above, there is no reason why the United States can’t agree to reaching a peace agreement.

As long as belligerent and hostile relations between the DPRK and the US continue to exist, talk of “respect for sovereignty,” “equality,” and denuclearization of the Korean Peninsula sounds hollow, devoid of any practical significance.

The DPRK’s option for building up its nuclear force under such difficult circumstances is not intended to seek any political and economic benefits from the US and other countries or for intimidating anyone. The DPRK was compelled to opt for building up its nuclear force to deter serious threats to our State and people posed by the United States which possesses the world’s most destructive nuclear force in quantity and quality and is in a state of war against the former. Therefore, the argument that the DPRK’s scrapping of nuclear weapons would pave the way for concluding a peace agreement is a sophism where the cause and the outcome are completely reversed.

That out of the two parties in belligerent and hostile relations, one party demands that the other disarm while continuing to inflict serious military threats on the latter is an expression of inequality in itself and proves that the former intends to prolong the belligerent relationship, not to bring peace.

We have witnessed a string of precedents where the United States has coaxed those countries with differing ideology and ideals, the countries that stand in the way of realizing its strategy for world domination, into disarming themselves with fraudulent promises to lift sanctions and normalize the relations before toppling them.

It is utter nonsense for the United States to demand DPRK denuclearization while constantly imposing nuclear threats upon the DPRK by military provocations such as large-scale joint military drills involving nuclear strike means.

“A policy based on the approach of laying stress on denuclearization alone on the conception that North Korea is equal to nuclear threats is doomed to fail. It is because the only way for North Korea to scrap its nuclear weapons is to convince the former into trusting in the US, and therefore, such a policy of merely sticking to the nuclear issue and pursuing stand-off is infeasible,” once noted Henry Kissinger, former US Secretary of State. [Editor’s note: We are unable to verify this quote.]

Sitting US government officials voice their interest, on every possible occasion, in détente and ensuring peace on the Korean Peninsula, and if they are as sincere as they sound, they should take a strategic option for giving priority to replacing the Armistice Agreement with a peace agreement before addressing the rest of the issues.

Today, thanks to the DPRK’s deterrence, the balance of power is maintained and nominal peace is preserved by the skin of its teeth on the Korean Peninsula.