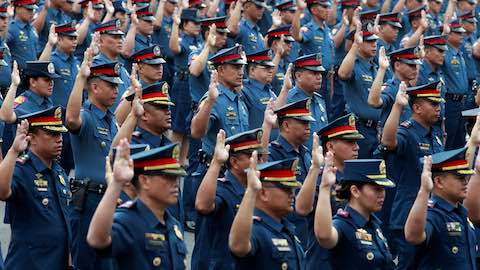 Philippine President Rodrigo Duterte may seek military support after withdrawing the national police from his war on drugs and handing the job to a much smaller anti-narcotics agency.

More than 7,600 people, mostly users and small-time dealers, have been killed since Duterte took office, vowing to crack down on methamphetamine use. About 2,550 of the deaths were in police operations while the others were vigilante killings or were unsolved murders.

The Philippine Drugs Enforcement Agency (PDEA) would run anti-drug operations, according to presidential spokesman Ernesto Abella. Its 1,800 staff are equivalent to just over 1 percent of the 160,000-strong Philippine National Police (PNP).

After a high-level security meeting, Duterte said the PNP was "corrupt to the core". A suspension of its drugs operations came a few hours later.

Duterte is furious with the PNP for the kidnap and killing of South Korean businessman Jee Ick-joo by police drugs squad officers. Jee was killed within the PNP headquarters grounds.

In a speech to soldiers, Duterte suggested he might need their help, saying he would be dead "if I don't include you in the game".

The mercurial Duterte has threatened several times to invoke military rule to help his war on drugs. Last week, he appeared to rule out declaring martial law, but said he could do so if he wished.

Presidential spokesman Abella could not immediately confirm whether the military, which has played a minor supporting role in the drugs war, would be given more responsibility.

Armed forces spokesman Brigadier-General Restituto Padilla said military involvement was discussed at the security talks, but it was not clear what that would be.

Duterte said police had been ordered to stand down from anti-drugs operations.

"No policeman in this country anywhere is allowed to enforce laws related to the drug campaign," he said, adding about 6,000 of them were "into drugs".

Local radio stations, which routinely cover drug killings, said there were no reports of any deaths in what appeared to be a rare bloodless night on Monday, although police could not confirm whether or not there were casualties.

Official data showed four additional deaths in police operations, although it was not immediately clear when those took place.

The attack on the PNP is a surprise about-face by Duterte, who had been unwavering in his support for police on the front lines of his drugs war.

His spokesman said the president was fully aware of PNP corruption when he gave police the lead in fighting narcotics, but the drugs problem was so big, he had no other choice.

"The president had to act, he did act, to enforce his political will," Abella told a news briefing.

"To avoid any of the apparent corrupt activities within the organization, he has now transferred (control) to PDEA."

The anti-drugs campaign has caused international alarm due to the high death toll and disputed circumstances of many of the killings. Human rights groups say the police have been involved in widespread extrajudicial killings. The PNP and Duterte strongly reject that.

Congressman Edcel Lagman described the sidelining of police as "a blessing" and said it was time to get tough.

"For the first time in six months there are no reports today of drug-related killings," Lagman said. "There should be no more kids gloves for police scalawags who deserve an iron fist."

Police officials who spoke to Reuters said there had been no written directive on the suspension of their role in the drugs war, but they were following the police chief's comments on television.

"That is good as an order," said Senior Superintendent Roberto Fajardo at Manila's Northern Police District.

"We now go after other crimes ... that's better for us, we fight all crimes."

One senior policeman said raids and sting operations on drug sellers had stopped and police operations had shifted towards reining in wayward officers, especially those reinstated following internal investigations.

"The cleansing process will take a front seat by strengthening our counter-intelligence operations, checking lifestyles of police officers involved in drug operations," said the officer, who requested anonymity because he was not authorized to speak to media.

"This is a huge job. I'm not sure how long will it take to do this because our Internal Affairs Service lacks manpower."