Philippines Asks China for Help in Fight Against Islamic Militants 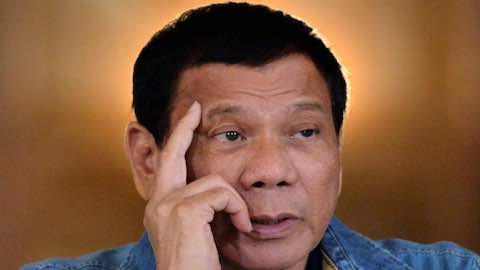 Philippines Asks China for Help in Fight Against Islamic Militants

Philippine President Rodrigo Duterte has asked China to help in the fight against Islamic State-linked militants by sending ships to patrol southern waters plagued by raids on commercial vessels.

Speaking to newly promoted army generals, Duterte said he had sought China's help in dangerous waters in the south to check the activities of Abu Sayyaf, a Muslim rebel group sustained by piracy and kidnap-for-ransom activities.

A surge in piracy off parts of the Philippines is forcing ship-owners to divert vessels through other waters, pushing up costs and shipping times.

Duterte said piracy in the Sulu Sea between eastern Malaysia and the southern Philippines would escalate to levels seen in Somalia, and raise insurance costs for firms and increase prices of consumer goods and services.

"We would be glad if they have their presence there ... just to patrol," Duterte said, adding that China could send coastguard vessels, not necessarily "gray" warships.

"In the Malacca Strait and here in Sulu Sea remains to be a big problem," he said. The Malacca Strait, between Malaysia's west coast and the Indonesian island of Sumatra, has over the years also been plagued by pirates.

He did not say if China had responded.

The Philippines, Malaysia and Indonesia had an agreement to patrol and tackle the Abu Sayyaf in the Sulu and Celebes Sea after they kidnapped the crew of Indonesian and Malaysian tug boats and South Korean and Vietnamese merchant ships.

Philippine Defence Secretary Delfin Lorenzana last week said cooperation might be expanded to include Brunei and Singapore. The United States has also expressed concern about the security problem and held exercises with Malaysia and the Philippines last year.

Lorenzana said the military had intensified operations on land with the aim of defeating Abu Sayyaf within six months.

"Philippines Asks China for Help in Fight Against Islamic Militants"