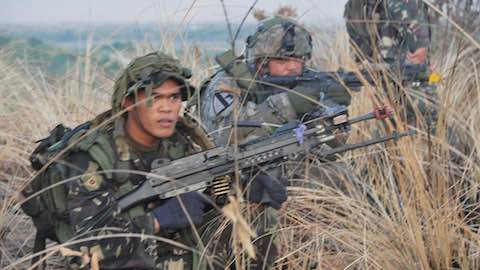 Philippine soldiers killed 15 militants and seriously wounded their leader, believed to be the Islamic State's representative in the country, following air and artillery strikes in a southern province.

"He needs blood transfusion. Without proper medical treatment, he may die," Ano said.

Philippine forces dropped bombs and fired shells at rebel positions in the mountains of Lanao del Sur in a bid to flush out Hapilon. The province is a stronghold of the Maute rebel group, which has also pledged allegiance to Islamic State.

Hapilon is on the Federal Bureau of Investigation's most wanted list for his role in the kidnapping of 17 Filipinos and three Americans in 2001 and carries a bounty of $5 million.

One of those killed is an Indonesian but Ano said they were still "digging and doing more investigation" about the foreigner's background. Hapilon was with two other foreigners whose nationality was uncertain, he said.

President Rodrigo Duterte appealed to the country's Muslim separatist groups to deny sanctuary to militants with links to Islamic State, warning a war would ensue that would put civilians in danger. [nL4N1FH29X]

A day before he made the appeal, the defense minister said foreign intelligence reports showed Hapilon was getting instructions from Islamic State to expand in the Philippines, in the strongest sign yet of links to the Middle Eastern militants. [nL4N1FG2J6]

Ano said a firefight could be expected between soldiers and Hapilon's group following the strikes.