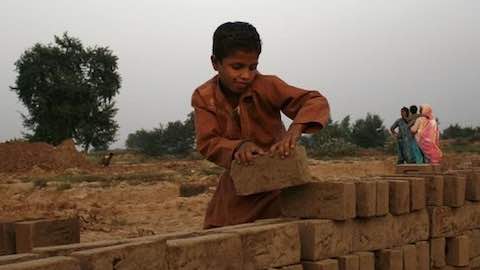 Pakistan's Sindh province has banned children under 14 from working, becoming the third region to limit child labour in a country where millions of minors work in sectors from brick making to carpet weaving, farming to mining.

Under new legislation which came into effect recently, offenders face six months of imprisonment and a fine of up to 50,000 rupees ($477). They risk tougher penalties in cases where children do dangerous jobs or are forced into prostitution, pornography and slavery.

"Due to appalling socio-economic conditions, children under the age of 14 are forced to work in factories, industries, fields and other hazardous areas," said senior Sindh minister Nisar Khuhro, who introduced the bill. "This law is meant to discourage this practice of exploitation."

More than 12.5 million children in Pakistan are involved in child labour, according to Child Rights Movement, a local advocacy group. Many of them are driven into work by poverty.

Pakistan's Labour Force Survey 2014-15 showed that of those children aged between 10 and 14 years active in child labour, 61 percent were boys and 88 percent came from rural areas.

What About The Girls?

Saba Shaikh, a director at Dastak, a non-governmental organisation promoting the rights of women and girls, expressed disappointment the Sindh law did not define domestic work as a hazardous occupation for children.

"We see instances of child domestic workers being beaten, tortured quite frequently. This is an unregulated sector," she told the Thomson Reuters Foundation.

"We should have a law protecting them as well."

Last year Punjab and Khyber Pakhtunkhwa provinces passed similar laws, with Balochistan the only province yet to introduce such legislation.

Ending child labour in all its forms by 2025 is one of the targets agreed by U.N. member states when they adopted in 2015 an ambitious set of development goals aimed at eradicating poverty and fighting inequality.