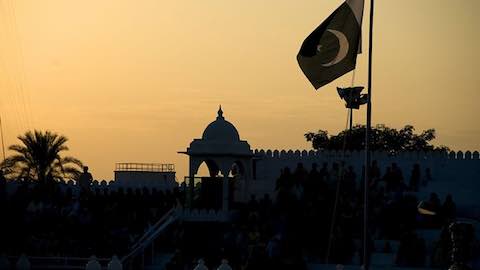 Deterrence theory (Morghan 2003; Brodie 1946) rightly suggests two scenarios of nuclear deterrence. First, when stable strategic equilibrium is achieved, it preserves peace and maintains stability. It diminishes the security dilemma, raises the threshold of nuclear use and the possibility of peace increases. States behave rationally; asymmetry goes down, and consequently, the probability of war decreases. Second, when deterrence becomes unstable, the nuclear threshold declines, asymmetry increases, and the probability of deterrence failure and war increase. Peace then becomes precarious and chances of nuclear employment become high. The second scenario is of growing concern in South Asia.

Nuclear deterrence in South Asia involves two very different states. Indian policy is based on the cumulative Ghandian and Nehruvian philosophy of Greater India (Abbasi 2015). Thus, India's nuclear policy-making originated from distinct values attributed to the possession of nuclear weapons: its historic rivalry with China and Pakistan, its ambitions for maximization of power (Perkovich 1999), and its desire to be a great power with a role in constructing and regulating the regional and to some extent global security order. In contrast, Pakistan's nuclear objective was not to seek changes in the regional and global securitization process and structure, but rather to maximize its own national security against perceived threat, primarily from India, without any regional or global influences of its own.

Nuclear deterrence has prevented both conventional and nuclear war up to this point. However, deterrence is unstable and peace remains fragile with a high probability of war at the sub-conventional level because of two factors: the distinct strategic direction of the states in this region and India's expanded defence budget. Indian power projection behavior (without consolidating regional priorities) is undermining the regional strategic environment and destabilizing regional-centric deterrence. India's recent defence budget is $51 billion (2.25% of its GDP) (Kaushal 2016) and observers have predicted that by the 2020, India is expected to have the third highest proportion of defence related expenditures after the US and China (Monoo 2016). India is expected to spend $70 billion in the year 2020 on military power projection, leaving Pakistan far behind.

India is rapidly modernizing its conventional, non-conventional and network-centric platforms thereby nuclearizing the Indian Ocean. Indeed, India is transforming its navy into a blue water navy with aircraft carriers, and developing an ambitious Ballistic Missile Defence (BMD) system that could destabilize the entire region. Conventional and nuclear realms cannot be separated, and the BMD has the potential to destabilize regional-centric deterrence in the future.

Pakistan's deterrent is credible enough to outweigh Indian aggression at this stage. Therefore, it should have no anxiety about Indian BMD, as these technologies are complex and it will take decades before India achieves a reliable and effective system. Despite external and regional pressures, financial constraints and technological hurdles, Pakistan has been consistently modernizing its nuclear deterrence force to stabilize regional-centric deterrence against Indian conventional and non-conventional moves, thereby maintaining peace and avoiding war. Pakistan has diversified its strategic force based on ballistic and cruise missiles from short range NASR, 60 km to intermediate range Saheen III (2,750 km). Nuclear deterrence has helped Pakistan to reduce its defense expenditures from 5.3% of GDP to 3.2% in 2010 (Monoo 2016). Nuclear weapons have become an affordable and cost-effective option to offset the Indian threat. Pakistan's budget for the fiscal year 2016-17 is Rs 860 billion, which is 2.6% of GDP. Pakistan spends the same allocation as a percentage of GDP (2.6%) but certainly Pakistan's GDP is much smaller when compared with India -- about one eighth. Pakistan cannot compete with India on a financial basis as it is facing serious economic constraints and has other priorities. However, without placing too much of a burden on its economy, Pakistan has to ensure the accuracy, surveillance, and effectiveness of its missiles system and the induction of new naval platforms.

What should the future course of action be for the region? The Kashmir issue (Cohen 2013) is the most complicated conflict, which may trigger aggression, leading to routine border skirmishes that may escalate into a future limited war, which could in turn potentially lead into a nuclear exchange. Besides Kashmir, the second important dimension is terrorism and extremism which redefined the threat spectrum and thereby complicated the regional security situation, and deepened mistrust after the terrorists attack on the Indian parliament (2001) and later Mumbai (2008). This shared threat cannot be addressed until the two states sit together and formulate joint regional security mechanism.

Realistically speaking, conflicting interests and the distinct aspirations of the two states are likely to incentivize further arms developments and prompt aggression and tension, thereby increasing the prospects of escalation to an undesirable level. Indeed, advancements in nuclear delivery mechanisms do not stabilize the region; rather they contribute to the potential escalation of state insecurities.

It is urgent that the two states unilaterally increase efforts to institutionalize peace. Pakistan has to make a hard choice of keeping a modest and comprehensive program -- without sliding into competition with India. Over the next decade or so, Pakistan should focus on the knowledge based economy, political stability, social security, and scientific and technological developments within a peaceful and resilient democratic culture, thereby opening up a knowledge corridor with the US and European countries. The major focus should be on capacity building among youth -- the linchpin of society – thereby turning them into resilient workforce. In the nuclear domain, Pakistan needs to establish education centers on nuclear escalation and nuclear use to generate greater public awareness and understanding of these issues.

Bilaterally, the two states need to build a stable political relationship while promoting trade and building cooperation. Both India and Pakistan should exercise maximum restraint, resume dialogue and institutionalize arms reduction mechanisms. They should focus on devising diplomatic means for the settlement of the bilateral disputes, especially Kashmir. Both states need to understand that the use of total force and the concept of total victory are not achievable in the nuclear domain. They should become conscious that they cannot avoid the risks of nuclear war until they revisit and rationalise their all-inclusive military plans, adopt budgetary constraints, and institute arms control mechanisms that reflect doctrinal clarity for the good of the people of both the states.

Today's global problems are sufficiently complex and interrelated that they require global solutions based on a multilateral and cooperative approach. International institutions need to be strengthened to maintain balance in this region. In the future, if states operate in isolation and solely according to self-interest, the interests of all assuredly will suffer. Cooperation is possible in cases in which gains are shared equitably.