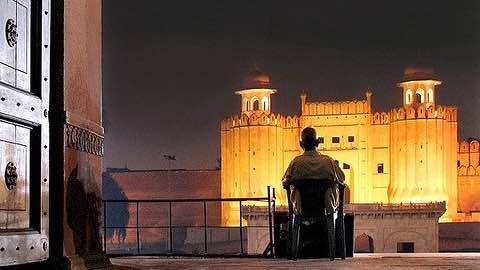 Pakistan is beginning to make concessions on nuclear weapons and redirect some of its national security from India to Islamist militants.

Second only to North Korea -- a distant second -- Pakistan has long been regarded as the loose cannon of the nuclear-weapons club. Among other things, Pakistan:

2. Failed to prevent one of its leading scientists, Abdul Qadeer Khan, from creating a nuclear black market to sell nuclear know-how and equipment.

3. Refuses to renounce a policy of possible first use, as almost all the other nuclear powers have.

4. Continues to build up its arsenal.

5. developing tactical nuclear weapons (smaller, for actual battlefield use) to compensate for the greater numbers of India's conventional forces.

6. There's an undercurrent of dread about the thought that Pakistan military can be infiltrated by Islamist extremists who might stage a takeover of one of its nuclear-weapons facilities.

Lately, though, Pakistan has provided hints of a more responsible (or marginally less irresponsible) nuclear-weapons policy. In Abu Dhabi's the National, Tom Hussain writes:"Subtly, that situation has begun to change."

In June, a US-Pakistan working group issued a statement about their shared desire to ensure the security of Pakistan's nuclear arsenal and steps Pakistan had taken to prevent even unintentional proliferation of its technology. Then, in August, the Carnegie Endowment for International Peace and the Stimson Centre proposed that Pakistan's strategic programme should be accepted and brought into the global non-proliferation scheme, in exchange for its commitment to a ceiling on the number of warheads it would produce and the range of its ballistic missile delivery platforms. This month, Washington Post columnist David Ignatius disclosed that Carnegie's proposals had, in fact, been adopted by the Obama administration and offered to Islamabad.

…a deal is not imminent. Indeed, Pakistan's leadership had appeared to turn down the offer outright. It said it would continue to work towards the development of a full-spectrum nuclear arsenal -- one with the ability to launch weapons from the air, land and sea.

&ellips 4 hours before prime minister Nawaz Sharif's meeting with Barack Obama, Pakistan's press, quoting the same unnamed official sources, reported the government's position was markedly different to the long-perceived policy of zero compromise. It would not accept limits on the number of tactical battlefield warheads, it was reported. No mention was made of other types of devices, the strong hint being that a compromise could be reached on those, eventually, if India were prepared to make a matching commitment.

I know it doesn't sound like much, but it

… is, by far, the biggest shift in -- and disclosure of -- Pakistan's nuclear doctrine since the 1998 tests. Indeed, the US offer is a significant development in as far as it underlines its belief that Pakistan's nuclear programme is not the leaky sieve it had been.

Nobody is suggesting a breakthrough will happen soon, but in a world increasingly characterised by regional conflicts, Pakistan's willingness to negotiate is an encouraging sign that responsible attitudes are being adopted.

Pakistan is often characterized as a belligerent, unyielding, and destabilizing force in international affairs. But despite longstanding and widespread negative perceptions, Pakistani behavior and strategic culture is changing for the better in important respects, as recently exemplified by anti-Taliban operations in the country's North Waziristan region and thawing relations with the United States and Afghanistan.