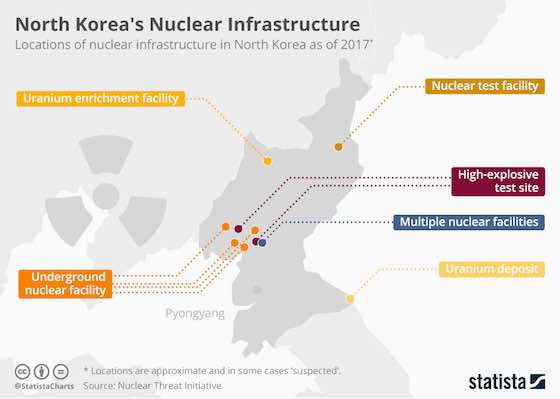 This chart shows the locations of nuclear infrastructure in North Korea.

Kim Jong-un's incessant desire to acquire his own nuclear deterrent is far from a state secret.

At a time when tensions between the United States and North Korea are only getting higher, the threat of an armed conflict erupting has arguably not been greater since the sinking of the ROKS Cheonan and the bombardment of Yeonpyeong island in 2010.

Two major differences between 2010 and 2017 though, are a somewhat unpredictable president sitting in Washington and the apparent advancement of North Korea's nuclear programme. In this new climate, our infographic uses information from Nuclear Threat Initiative to show where Kim Jong-un's nuclear infrastructure is located.

The chart above shows the locations of nuclear infrastructure in North Korea as of 2017.