Why Kim Won't Give Up His Nukes 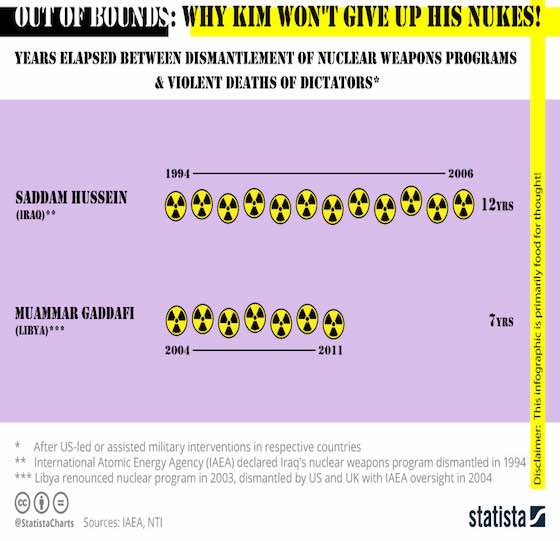 Why Kim Won't Give Up His Nukes

This chart shows the years that elapsed between the dismantlement of nuclear weapons programs and the violent death of dictators.

During U.S. President Donald Trump's East Asia trip he also stopped over in South Korea. Trump's messages towards the North Korean regime under the leadership of dictator Kim Jong-un are pretty mixed, ranging from the recently more diplomatic offering of a better future to having Kim and his country bombed to bits.

Hardened realists among scholars of international relations have a pretty simple explanation for why Kim isn't inclined to stop his nuclear program. In short: It wouldn't serve his best self-interest. History holds some lessons for what could happen to him once he went nuke-free. There are two cases repeatedly brought up in this discussion: Saddam Hussein of Iraq and Muammar Gaddafi of Libya.

Both these men had at some point started developing nuclear arsenals, both had given up their programs under international pressure, were eventually removed from power by means of US-led or US-supported military action and were eventually killed.

In the case of Saddam Hussein, Iraq had been declared nuke free by inspectors of the International Atomic Energy Agency (IAEA) as early as 1994. Later allegations, he was still sitting on a stockpile of undeclared nukes and other weapons of mass destruction - which was the stated reason for the invasion of Iraq in 2003 - never verified. After the US-led invasion, Saddam was found hiding in a hole in December 2003, was sentenced to death by an Iraqi special tribunal and hanged at the end of 2006.

The strongman ruler of Libya, Muammar Gaddafi, voluntarily renounced his nuclear weapons program in 2003, which was then dismantled by American and British experts with IAEA oversight in 2004. A popular uprising during the Arab Spring in 2011 turned in to an all-out armed rebellion against his rule. Eventually, NATO sent out war planes to enforce a no-fly zone and bomb government positions. In October 2011, a convoy of cars in which Gaddafi sat was bombed. He was captured by rebels and shot dead.

So, the basic theory assumes that if they had stuck to their nuclear programs they might have survived. Then again, there are pretty many ifs in this equation: Neither do we really know what Kim Jong-un's rational behind his provocative behavior is. We can't really know if Saddam and Gaddafi would have survived longer than they did if they had stuck with nuclear weapons in their arsenals. But it might just be part of an explanation as to why consecutive North Korean leaders cling to their nukes.

"Why Kim Won't Give Up His Nukes"