The Future of North Korean Provocations 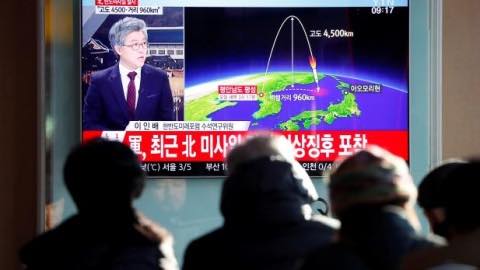 The Future of North Korean Provocations

In line with North Korea's stated nuclear doctrine and precedent from previous new nuclear powers, the North Korean government is more likely to brandish its nuclear assets to intimidate and coerce.

North Korea's nuclear and missile provocations to date have resulted from its developmental mission to produce a nuclear deterrent. While lethal conventional provocations remain a tragic component of North Korea's approach to the South, Pyongyang has focused its security response to Washington over the last quarter century on its nuclear program. North Korea could catch the world's attention and provoke through (re-)starting fissile material production facilities, missile flight tests, or nuclear tests. As Pyongyang declares victory in its nuclear development and shifts to an operational focus for its nuclear arsenal, the nature of North Korean provocations will change--and get more dangerous. In line with North Korea's stated nuclear doctrine and precedent from previous new nuclear powers, Pyongyang is more likely to brandish its nuclear assets to intimidate and coerce.

In November 2017, after a North Korean inter-continental ballistic missile (ICBM) flight test, Kim Jong-un claimed his country had completed the development of its nuclear force. He repeated the sentiment in his 2018 New Year's address, adding that the regime had successfully achieved a nuclear deterrent to check American invasion. Kim's claims are pre-mature, but North Korea's technical barriers to a reliable nuclear arsenal that can threaten the U.S. mainland are winnowing. Whether it takes Kim Jong-un "a handful of months," as the CIA Director predicted, or a handful of years to gain genuine confidence in his ability to deter the United States, it is worth considering now the implications.

North Korea's nuclear doctrine articulates two purposes for its arsenal: deterrence and coercion. The deterrent goal appears to be the bulk of the strategy. Pyongyang repeatedly cited the U.S. invasion of Iraq and intervention in Libya as justification for its nuclear development. The United States will intervene militarily in a smaller state unless it invests in equalizing nuclear weapons to deter, they argued.

However, Kim Jong-un has also directed the development of his nation's nuclear program to coerce. In 2013, Kim's first major speech on nuclear issues stressed the importance of nuclear development for national defense and economic development. This "byungjin," or dual-track, approach remains, but Kim has expressed broader purposes more recently for his regime's nuclear weapons as the program has developed. At the 2016 Korean Workers Party Congress, he reaffirmed the byungjin line, stressed deterrence, and claimed a diversified nuclear force should be a useable element of national power. Nuclear weapons, he said, provide North Korea more influence in foreign affairs on the Korean Peninsula and throughout the region. In a series of field guidance visits, Kim ordered a nuclear arsenal that can deter and coerce.

North Korea cannot strike targets with its nuclear weapons without risking regime-ending retaliation, so it begs the question how Kim may hope to use nuclear weapons to coerce. Early in the Cold War, Nobel laureate Thomas Schelling identified how states sought to leverage nuclear weapon not only as a last ditch protection against invasion but to shape proactively an adversary's actions. The record of success in rattling the nuclear saber is mixed, but most nuclear states have tried:

In 1958-59, the Soviets moved nuclear weapons into East Germany during the Berlin Crisis to urge U.S. withdrawal from the city.

In 1962, the United States alerted its nuclear forces and both Kennedy and Khrushchev struggled to maintain effective nuclear launch authority amid the Cuban missile crisis.

In 1973, Israel made initial moves to arm its nuclear-capable Jericho missiles to unlock reluctant American military support during the Yom Kippur War.

In 1999, Pakistan moved out of storage its nuclear-capable missiles during the Kargil crisis.

Beyond the historical record of other states rattling the nuclear saber, Kim fits the mold of a leader more likely to use brinkmanship and risk-accepting behavior. He lacks conventional military superiority over the U.S.-ROK alliance that would render nuclear threats redundant, and he does not have the same reputational risks associated with nuclear bluster given past nuclear statements.

A credible North Korean nuclear deterrent injects a new dynamic into North Korean brinkmanship. North Korea's conventional forces have long raised their alert status during U.S.-ROK military exercises, noting that the U.S. military build-up could be a precursor to invasion. How would the U.S.-ROK alliance respond if North Korea noted in advance that it would alert its nuclear forces to defend against the possibility of military exercises turning into an invasion? In the Cuban missile crisis, the nuclear alert jeopardized civilian control over nuclear launch decisions. How would the alliance respond if Kim claimed he would pre-delegate launch decisions to field commanders if military exercises practiced "decapitation strikes" against North Korean leadership targets? Neither a nuclear alert nor pre-delegating launch authority involves using nuclear weapons, but it rattles the saber and increases the risk of accidents and unauthorized nuclear use.

If North Korea's ballistic missile-carrying submarine, currently under construction, later appears off South Korea's coast ahead of an election or international sporting event, how will South Korea and the United States respond? It has been routine to return to the UN Security Council following North Korean missile launches and nuclear tests, but thinking through how to deter and respond to new types of North Korean provocations based on an operational nuclear capability is necessary to get ahead of the threat curve and avoid policymaking amid crisis. Strategic provocations require more than military planners' attention, and whole-of-government and bilateral and trilateral (including Japan) responses are necessary to ensure a thoughtful and coordinated approach. The first step is recognizing that the future of North Korean provocations is likely to be different than its current playbook.

Author: Patrick McEachern is an international affairs fellow at the Council on Foreign Relations and public policy fellow at the Woodrow Wilson International Center for Scholars. Views expressed do not necessarily reflect those of the U.S. government or Department of State.

Photo: People watch a television broadcast of a news report on North Korea firing what appeared to be an intercontinental ballistic missile (ICBM) that landed close to Japan, in Seoul, South Korea. Reuters/Kim Hong-Ji

"The Future of North Korean Provocations"