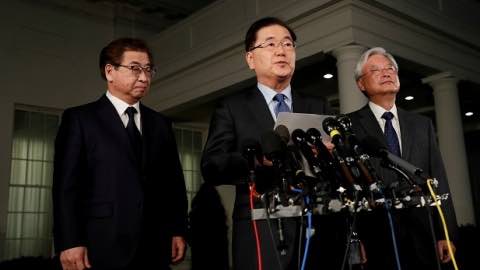 By Scott A. Snyder

Kim Jong-Un's invitation to Donald Trump to meet, delivered through South Korean intermediaries, is both stunning and predictable.

After all, Trump has telegraphed his desire for a meeting with Kim ever since he suggested a hamburger summit with Kim as a candidate for president in 2016. Now that Trump has his invitation, the question is whether he can exploit it to bring a runaway North Korean nuclear and missile threat under control without being advanced by an accompanying intensive negotiation process that would inevitably rely on specialized expertise within the U.S. government to craft the level of agreement and verification measures necessary to pin Kim down. At a minimum, a prospective summit should provide momentum to secure the release of three Americans currently detained in Pyongyang.

Historically, the American president has been the "closer" of such deals, but an early meeting between Trump and Kim would sacrifice that role in favor of a reshaping of the relationship with the North Korean leader by setting the tone surrounding the U.S.-North Korea relationship without an accompanying (decades-long) process and verification of North Korea's implementation of denuclearization.

Past denuclearization efforts have foundered on a combination of failures to secure verification and North Korean subterfuge, but have never gone so far in giving the Kim family the prestige or treating North Korea with the strategic weight that it has sought for decades. Trump's strongest argument for such an approach: everything else has failed, and a U.S.-North Korea summit has never been tried.

Oddly, Trump's own threats to annihilate North Korea, while challenging North Korean assumptions about how the United States would respond to its nuclear advances, has generated political space for Trump: even a bad deal with Kim may be perceived as a better outcome than a catastrophic conflict with North Korea.

But why would Kim reach out now and offer a meeting with Trump? Speculation on the range of possible motives for Kim will range from desperation to uncanny strategic intuition. But the most interesting aspect of Kim's outreach and its timing is that it combines a high personal propensity to take risk with a strong desire to actively manage uncertainties generated by the growing risks to North Korea's regime survival.

Alongside the Kim family's desire to assert independence and centrality as narratives that undergird and reinforce its control over the regime is a deep desire for external affirmation that can only come from improving North Korea's relationship with the United States. That is why North Korea has consistently asserted that it would only abandon its nuclear program if the United States were to drop its "hostile policy" -- normalization and acceptance of the regime by the United States as an alternative regime survival guarantee to that provided by nuclear weapons. In essence, the Kim family has always wanted Washington to impute to Pyongyang the same strategic weight that Richard Nixon gave to Beijing when he used the China card to balance the Soviet Union.

At the same time, Kim's move smacks of both desperation and an astute recognition that international economic pressure, political isolation, and the threat of military conflict could eventually checkmate the regime. Instead of furthering regime survival, North Korea's pursuit of the capability to strike the United States with nuclear weapons raised the risks of accidental conflict and preventive war.

For Kim, the prospect of an early summit with Trump provides the best prospect of removing international sanctions pressure while giving Kim room for maneuver to possibly keep his nuclear deterrent in place. Moreover, a prospective nuclear deal with Trump provides Kim with an opportunity to secure external symbols of regime legitimacy without having to address North Korea's atrocious human rights record. (After all, only Trump can offer a Trump-branded hotel in Pyongyang, payable in fissile material.)

Given the stakes, risks, and blowback that inevitably will accompany a Trump-Kim hamburger summit, a safer course, if indeed a summit is inevitable, would be to retain South Korean involvement by securing an invitation for Trump to join the inter-Korean summit already announced for the end of April at Panmunjom.

Author: Scott Snyder is senior fellow for Korea studies at the Council on Foreign Relations and author of South Korea at the Crossroads: Autonomy and Alliance in an Era of Rival Powers.

Photo: South Korean officials, Chung Eui-yong, Cho Yoon-je, and Suh Hoon, make an announcement about North Korea and the Trump administration outside of the West Wing at the White House in Washington. Reuters/Leah Millis