A New Page for Taiwan and China 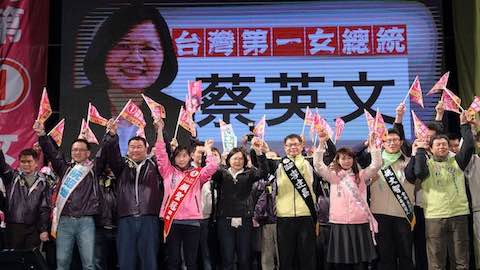 It has been a new page for Taiwan. This is the first time for the Democratic Progressive Party (DPP) to completely control the presidency and a majority of the parliament (The Legislative Yuan) and for a female candidate, Tsai, Ing-wen, to be elected as president.

It has been a new page for China as well since China now has to face the reality that the new government refuses to accept Beijing's stance that Taiwan and China should be one and the same China. From 2008 to 2010, the former ruling party, the KMT (Kuomintang) party had established close rapport with the Chinese government in order to seek détente and promote exchange in the cross-Strait relationship. Most importantly, the KMT expected that this reconciliatory approach would strengthen its electoral support in Taiwan. However, things turn out contrary to the expectation of the KMT. Not only did most of Taiwanese not support unification with China, they also withdrew their support from the KMT in the central and local elections.

However, President-elect Tsai Ing-wen and the DPP party could not be overwhelmed by the electoral victory because they have to confront the deteriorating relationship with China. China downsized the number of China tourist groups to Taiwan and cut off direct dialogues with the incumbent government. The main reason is that President Tsai opposes one the China principle and refuses to recognize the existence of a consensus in which China and Taiwan agreed they are part of"one China," with varying interpretations, in the 1992 meetings. Is Taiwan poking a bear, or refusing a fox guarding the hen house?

Taiwan has operated as democracy since 1987 and has experienced three turnovers of political parties. Democracy has become a way of life in Taiwan. Any change on the question of sovereignty has to have the consent of Taiwanese people. Maintaining the status quo remains the mainstream of public opinion. Political leaders in Taiwan are hard to get elected if they deviate from the center of political spectrum. China is an authoritarian regime without the guarantee of civil rights such as freedom of expression and freedom of association. If Taiwan became part of China, democracy in Taiwan would fall back into authoritarianism. Hong Kong is a good example. China promised to enact the policy of one country-two systems when Hong Kong returned to China in 1997. However, China did not keep its word afterwards. The policy of one country-two systems does not carry much weight in Taiwan because it was a failure in Hong Kong.

The rise of China has been a grave concern to China's neighboring countries. In particular, China has been assertive in claiming that the South China Sea is an inland sea. It has done so by demarcating nine dash lines, which infuriates most Southeast Asian countries. China has been using coercive diplomacy or military force to expel Philippine fishermen in the Scarborough Shoal Island, where they have been fishing as a regular practice for many decades. Moreover, China has been building military runways and radar facilities in the artificial islets in the South China Sea. These facts demonstrate that China cannot rise peacefully. If that is the case, Taiwan's grand strategy toward China should switch from bandwagoning to balancing. For the US and NATO to maintain regional peace and stability, Taiwan is an unsinkable aircraft carrier. If Taiwan were part of China, then the First Island Chain would be broken and China could stretch her maritime power directly into the Pacific Ocean. Taiwan has important strategic interests for the United States and NATO in maintaining order in Asia. Moreover, Taiwan should bandwagon with the United States and NATO in order to balance China's increasing threats vis à vis Taiwanese sovereignty.

The current status quo of relations between Taiwan and China can be characterized as diplomatic estrangement. One may argue that the standoff is like walking on thin ice. However, if Taiwan does not declare de jure Taiwan independence, China cannot justify the use of military force against Taiwan. Taiwan has been purchasing defensive weapons from the United States in order to maintain the balance of military power between Taiwan and China. This is not to say that the current government should adopt the policy of arms race with China. Basically, the crux of the issue is to allow Taiwan, with reasonable weapons, to defend itself from surprise attacks from China. Such an establishment can also guarantee that China not be able, unilaterally, to decide the future of Taiwan. Taiwan is willing to coexist with China peacefully, but not at all costs. Recently, China offered to sign peaceful agreements with Taiwan when the chairperson, Xi Jinping, met officially with the chairwoman, Hung Hsiu-chiu of the KMT party, in Beijing. However, history tells us that after China and Tibet signed peaceful agreements, China reneged on its commitment by sending the troops to Tibet.

American President John F. Kennedy insightfully expressed, ‘Let us never negotiate out of fear, but let us never fear to negotiate’. Taiwan cannot accept preconditions before any negotiation happens. Taiwan is an exemplary of democracy with Asian values. Any force to deprive democratic will of Taiwanese people should not be acceptable to international society. Taiwan needs more voice in the international sphere. Taiwan remains today in the status of non-member to the United Nations, although Taiwan has territory, people, government, and sovereignty. China needs to respect democratic values and stop using coercive means to force Taiwan to unify with China.

"A New Page for Taiwan and China"