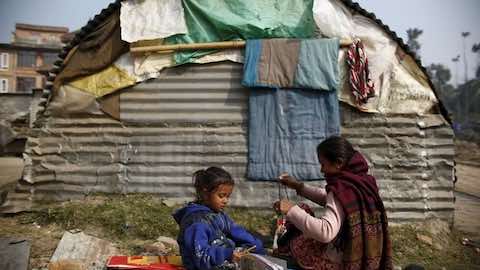 Nearly two years since Nepal's devastating earthquakes, millions of survivors languish in makeshift shelters as the government has failed to deliver billions of dollars pledged in aid for rebuilding.

The comments from Human Rights Watch (HRW) came a day after Nepal sacked the head of its reconstruction agency and replaced him with his predecessor in a political game of musical chairs that is worsening the plight of quake survivors, critics say.

"It is disturbing that the government has dragged its heels on tending to urgent humanitarian needs of earthquake victims," Brad Adams, New York-based HRW's Asia director, said in a statement. "There is no excuse for this dithering, and the government should be held accountable for this negligence."

Almost 9,000 people died and more than half a million homes were destroyed when the 7.8- and 7.3-magnitude earthquakes rocked the impoverished Himalayan nation in April and May 2015.

Almost two years on, many of the estimated 8 million people affected continue to live in tarpaulin and bamboo tents due to delays in the government disbursing funds for them to rebuild their homes.

Government officials blamed the delays on Sushil Gyawali, CEO of the National Reconstruction Authority, claiming he failed to coordinate relief work with government ministries and mobilise the personnel necessary for reconstruction work.

Gyawali, a civil engineer appointed a year ago, denies the charges and is seeking legal action against the dismissal.

Officials say rebuilding will now speed up with the reappointment of his predecessor Govind Raj Pokharel, who was fired in 2015 when a new government took charge.

"I'll focus to overcome this and mobilise required human resources," Pokharel told the Thomson Reuters Foundation. "The work has been delayed, but we will be able to complete in time."

Pokharel was vice chairman of the National Planning Commission at the time of the disaster and played a key role in preparing a national action plan to rebuild the nation.

Aid agencies and donors blame political instability and successive changes in government for the delays. The country has had three new governments since the disaster.

They also blame the slowed response on political parties who spent months squabbling over a new constitution, rather than focusing on reconstruction efforts in the disaster's aftermath.

While more than 60,000 houses have been reconstructed, the government says more than 150,000 families have yet to receive any of the funds pledged for rebuilding.

For these survivors, who have endured two monsoon seasons and two winters in tattered tents, the political infighting and squabbles at the top provide little hope.

"I have no alternative but to wait for government support like I have been doing all these months," said 52-year-old tailor Karna Bahadur Pariyar, sitting cross-legged inside a blue tarpaulin tent in a relief camp on the outskirts of Kathmandu.

"Whoever comes to the post means little for us."