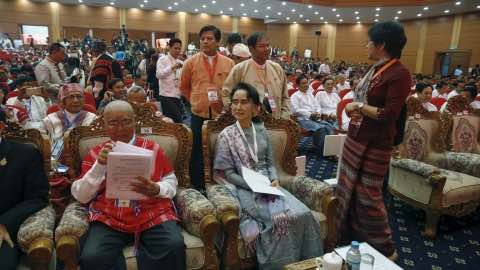 Over the past two years, the international community, and much of the media, has focused on the situation in western Myanmar's Rakhine State, where a brutal campaign against the Rohingya, reportedly by the Myanmar military and its associates, has been called crimes against humanity and genocide by leading rights organizations and the United Nations.

The situation in Rakhine is undoubtedly horrific, and there appears to be little chance of it improving measurably in the coming years. Despite an agreement by Bangladesh and Myanmar to begin repatriating Rohingya from Bangladesh back to Myanmar, few Rohingya are willing to return, given that little has changed on the ground in Rakhine State. Some Rohingya are trying to escape refugee camps to prevent themselves from having to return to Myanmar.

The horrendous situation in Rakhine State, which is essentially defended by Myanmar's civilian leader Aung San Suu Kyi, is compounded by the fact that, in other parts of the north, east, and northeast, violent conflict has spiked as well, despite getting little attention from the international media, save some Southeast Asia--focused outlets. The spiraling conflict in other parts of the country undermines any hope for a longtime peace agreement between the central government and ethnic minority armies, adds to instability in Myanmar, and potentially further empowers the military, which takes advantage of instability to continually assert itself as the real power in the country.

As Asia Times recently noted, the Karen National Union (KNU), one of the longest-standing insurgent groups, now has pulled out of the Myanmar government's peace initiative with ethnic minority rebel outfits, at least temporarily. This deals a further blow to the sputtering peace initiative, one of the Suu Kyi administration's biggest priorities. The KNU had been the biggest group to sign onto the initiative. The withdrawal sets the stage for possible renewed conflict between the KNU and the military.

Meanwhile, in the north, the Kachin Independence Organization and its armed wing, the Kachin Independence Army (KIA), which are not signatories to the peace imitative, have been engaged in significantly stepped-up conflict with army units. As longtime Southeast Asia conflict expert Anthony Davis notes, the military has been engaged in the broadest counterinsurgency program in Myanmar in "decades," and in response the KIA has prepared for long-term guerilla warfare with the military, with no end in sight. Davis notes that the military launched multiple dry season offensives against the KIA earlier in the year. These offensives have caused significant civilian casualties, with internally displaced people fleeing to camps throughout Kachin State. UNCHR, in a report released earlier this year, said there had been a recent "spike in reported human rights violations and abuses and violations of international humanitarian law in Kachin and Shan states."

Meanwhile, the lack of any progress between the central government and ethnic armies in the north and east like the KIA further convinces other insurgent groups that Naypyidaw has no real interest in peace. Many of the smaller ethnic armies are increasingly suspicious of the peace initiative, while the United Wa State Army, the biggest armed ethnic group in Myanmar, has no real reason to move forward and support the peace initiative.

The United States has little influence over Naypyidaw's approach to these myriad conflicts. U.S.-Myanmar relations are tense, due largely to the crisis in Rakhine State. Other outside actors—notably China—do have real leverage over Naypyidaw's approach to the ethnic armies, especially since some of the conflicts, such as those in Shan state, flare up right by China's borders. China has shown some signs of support for the peace process, such as paying for some representatives of armed insurgent groups to attend talks with Naypyidaw and serving as an interlocutor for some of the ethnic armies.

But if Naypyidaw can provide stability on China's borders by crushing insurgent groups, rather than a peace deal, Beijing probably would be happy with that result too. So far, Beijing seems content to mostly back the Myanmar military's approach to Kachin State. Fortify Rights, a rights documenting group, released a report in August noting that Beijing has tried to keep aid groups from assisting internally displaced people in Kachin State, near the Chinese border, a move that could cause even more suffering.

Photo: Myanmar's Aung San Suu Kyi smiles as she arrives to give a speech during talks between the government, army and representatives of ethnic armed groups over a ceasefire to end insurgencies, in Naypyitaw. Soe Zeya Tun/Reuters