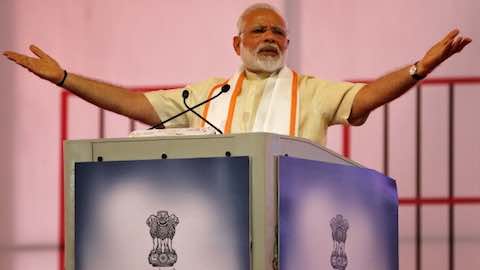 An astronomical 88 percent of those surveyed held a favorable view of him, up from a dip to 81 percent in 2016, and one point above 2015's favorability rating of 87 percent. 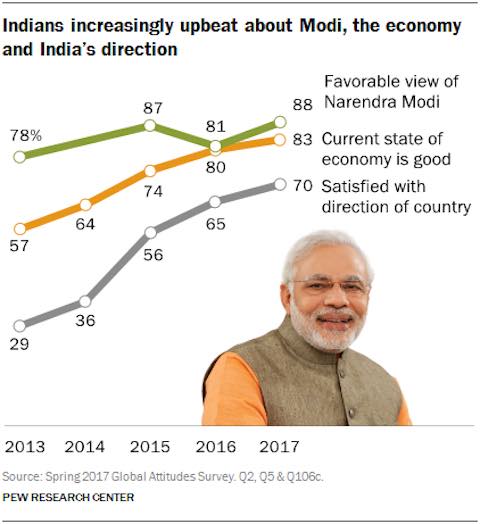 The Pew survey also showed a very significant uptick, a trend continued since 2013, on the question of being "satisfied with direction of country." The latest figures had 70 percent "satisfied" with their country's direction, up from 65 percent last year and 56 percent in 2015. In 2014 only 36 percent of respondents were "satisfied" with India's direction, and in 2013 a low 29 percent.

Similarly, on a question concerning views of the economy, 83 percent said they thought the "current state of economy is good." That too is up from last year's 80 percent, in turn up from 2016's 74 percent, and 2014's 64 percent.

In recent months concern about the Indian economy has mounted in India. Growth rates have been slowly dipping for six straight quarters, and in the most urgent area of concern -- job creation -- alarm bells are now going off. People are worried about jobless growth. On the question of economic growth, analysts have generally pointed to the double whammy of India's currency demonetization in November 2016, which created a cash shortage with immediate impact on India's large informal economy, followed by the overly complicated rollout of the new Goods and Services Tax (GST).

While the Pew team fielded their survey prior to the introduction of GST, their late-February-to-March window certainly would have reflected public opinion on demonetization. Favorability of Modi, of the economy, and of the country's direction moved higher nonetheless.

The Pew survey is well worth reading in full. In addition to these headlines, it also contains findings that reaffirm what anyone might expect: for example, a huge partisan difference exists when it comes to views of the prime minister -- a thirty-two-point gap between Bharatiya Janata Party versus Indian National Congress members' views. I can't say this was unexpected.

But it also has some surprises. For example:

"Modi Is Really Popular in India"