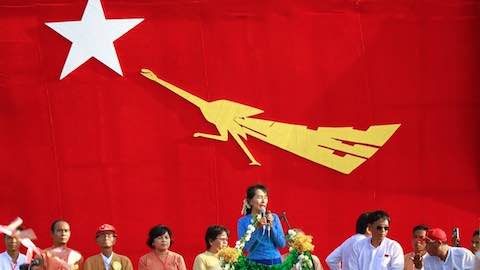 Rooting out predatory power such as that firmly in place after decades of military rule in Myanmar requires public and international buy-in.

Decades of military rule has taken its toll on the Myanmar state. Successive military regimes have left systems of regulation and distribution, like the law and social welfare systems, predatory and dysfunctional. Until very recently the state was an adversary -- a machine to distrust and evade. Then, on the 8th of November 2015, decades of struggle and aspirations for change came to a watershed moment as the National League for Democracy (NLD) won a sweeping majority of parliamentary seats. December saw a previously-unimaginable meeting between NLD leader Aung San Suu Kyi and the man who held her under house arrest for year, former head of the military junta Than Shwe.

It is a new era in Myanmar. Five years of reforms have begun to alter expectations. But the interweaving of new opportunities and new threats has brought both hope and feelings of intensifying and entrenching or deepening vulnerability (page 65). As Aung San Suu Kyi and her fellow NLD parliamentarians prepare to take their seats in the capital Nay Pi Taw in the coming months, they will have no shortage of obstacles. How challenging is the road ahead? Tough enough that managing expectations in NLD-led Myanmar will be a triumph in itself.

Much needs changing, and quickly: urgent appeals for peace, constitutional reform, a reversal of land dispossession, protection of Rohingya and other Muslim communities, reform of old and recent bills, transitional justice, infrastructure and human development, management of foreign investment, and an overhaul of education, healthcare and public services are all on the table. Looking forward, it is difficult to decipher where to start or to determine whose priorities deserve priority. Looking to the past, there is so far no indication of how Myanmar will deal with decades of atrocities. Simply formulating an agenda with such diverse local and international pleas requires layers of tough decisions, tough justifications. Accounting for NLD constituents is one thing. A more complex task is giving due consideration to groups that range from portions of the military to supporters of the Ma Ba Tha to parties representing autonomous ethnic and religious minority interests to the Rohingya, whom repeat reports argue to be the target of genocidal acts.

Complicating matters further, the arrangement in parliament has put major restrictions on the NLD. Negotiations to arrange a power-sharing government have begun. Whatever the outcome, all parties will be operating under the 2008 Constitution. It is a Constitution that bans Aung San Suu Kyi from the presidency and gives significant autonomous power to the military, including the ability to block any changes to the Constitution.

Systemically, the NLD lacks any kind of executive control over the most powerful of institutions -- the military, as well as all of the bureaucracies under its mandate including the police and Department of corrections, which determine who gains protection and who becomes a target. The lack of control over the military also undermines the NLD's ability to divest the military's massive financial allocations and redirect budget items into public goods and services. More broadly, it is unclear what the military sees as its domain. For instance, does the military see itself as the landlord of Myanmar? Currently, all land ultimately falls under state ownership. If the NLD attempts to overhaul governance in ethnic areas, will the military overrule this as a home or border affairs issue? Particularly concerning is whether at the first hint of formal transitional justice initiatives, the military will act aggressively in interpreting its mandate. All of this means that the military has a significant say in who benefits from NLD governance and how.

Lacking the full breadth of executive powers, it may be an overstatement to say that the NLD has taken over the reins. Control over parliament may translate to only marginal control over the state. This is a frustrating dynamic around which the management of expectations depends on clarity from parliament and those reporting on parliament.

That the system has tied the hands of the NLD both in terms of law enforcement and resource allocation does not mean the NLD can do nothing. With all of those seats in parliament, the NLD has a prominent platform. The question is how to use it. Changing the system itself is one end. Recently, two very different sentiments have come out in this regard. First, there is the message from a defiant Aung San SuuKyi in a Channel News Asia interview:"&ellips in any democratic country, it’s the leader of the winning party that becomes the leader of the government. If this constitution doesn’t allow it, then we will have to make arrangements so that we can proceed along usual democratic lines.' Then there is the reminder from Thant Myint-U in a New York Times piece: Ex-generals who knew the system well had trouble changing it&ellips It's going to be even more difficult for outsiders.' Attention sways from opportunities to obstacles for systemic change and this kind of back and forth becomes the backdrop against which audiences assess progress or lack thereof.

Changing the system itself is one imperative for NLD parliamentarians. Creating change through the current system is the other. NLD parliamentarians will have to balance these two ends. To some extent, the NLD has no choice but to work in the current system. They have to deal with the state as it is. Even if the NLD wins its spars in Nay Pi Taw and gains access to the entirety of state powers and budgets, issuing and implementing reforms are two different beasts. This is why positioning constitutional or law reform as a fix-all can mislead. Military and police forces do not gain new identities and institutional cultures overnight. Decades of civil war and surveillance make demilitarisation, demobilisation and reintegration of state and non-state forces an extensive task. Education reform means retraining existing teachers, redrafting curriculum, building new schools and introducing a new type of pedagogy in Myanmar. Healthcare provision requires similarly vast renovations of infrastructure and human resources. Waste, water, power and resource management all suffer from extensive technical and material deficits. All in all, the political-economy has left much of the population in survival-mode and susceptible to exploitation of many kinds.

Reversing predatory land grabbing and extraction exercises is a priority in much of Myanmar. Remediation of this kind requires an accounting of both past and present claims of tenure. Beyond land and labour protection, will it be possible to reach and redistribute wealth built through corruption and cronyism under decades of junta rule? None of these ends are easily won.

There will be no silver bullets in NLD-led Myanmar. Parliamentarians entering Nay Pi Taw and their constituents are dually aware of this. Constituents live the complexities, contradictions and constraints of the system daily. Self-protection and everyday resistance remain a widespread necessity as communities have to navigate and broker for space and opportunities. Overcoming decades of distrust and adversarial relations with the state will take time. People may be willing to trust, hope and engage in new ways with the election of the NLD government. However, in the politics of the everyday, they encounter the same faces, same uniforms, and same barriers and challenges that, while distinct from decades past, are threatening in new ways. Buy-in into the system will not happen until the system proves itself. Even with the NLD's presence in Nay Pi Taw, it is likely to be some time before individuals even consider trusting the protection and services of local bureaucracies that have long been responsible for their suffering. Change in Nay Pi Taw cannot translate directly into shifts in everyday governance because there is no capable system of everyday governance in place.

Rooting out predatory power such as that firmly in place after decades of military rule in Myanmar requires public and international buy-in. This is where the politicking becomes an art. NLD representatives will have two dialogues to look after: one within the walls of Nay Pi Taw and one with the public. How can this NLD government manage expectations, maintain momentum, build trust and get things done?

There is certainly no pre-existing formula. In many ways, managing expectations is managing hope. This will entail a difficult balancing act: exposing the flaws of the existing system without thwarting opportunities for progress in a power sharing scheme; seeking buy-in from the people without setting the people up for further frustration, compelling people to imagine a different kind of state without misrepresenting existing realities, looking back and looking forward, and accounting for the interests of those with a pressing need for some type of representation in Nay Pi Taw.

About The Author (Matthew Mullen):

Dr Matthew Mullen is a lecturer at the Institute of Human Rights and Peace Studies, Mahidol University, Thailand. He is author of a forthcoming book on the struggle for change in Myanmar, Pathways that changed Myanmar: From bullets to bribery.