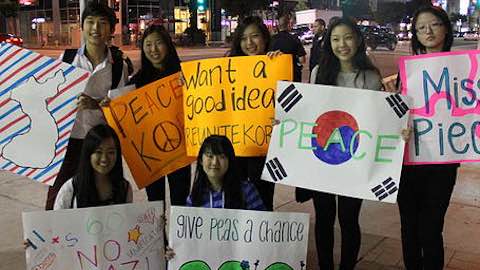 by Ramsay Liem and Christine Hong,

Until recently, Korean Americans were all but written out of the U.S. history of the Korean War. A rising group of artists, oral historians, and community members is writing them back in.

A few summers ago, Barack Obama addressed a crowd of American veterans and South Korean dignitaries at the U.S. Korean War memorial. Among other curious word choices, Obama declared that the Korean War -- which he called a distinctly “American story” -- was “no tie” but “a victory.” The war may have “finally ended” in July of 1953, but its bright legacy, he asserted, persists into the present.

That might come as news to the Koreans, including those living in the United States, who are still dealing with the war's fallout.

Most Americans fail to appreciate the outsized role of U.S. policy in the history of Korea -- from the initial partitioning of the peninsula at the 38th parallel by U.S. forces after World War II to the outbreak of full-scale war and the failure to follow up a 1953 ceasefire agreement with a proper peace treaty.

Referred to as the “forgotten war,” the Korean War, which technically never ended, registers murkily in the U.S. historical record. When commemorated at all, the first hot conflict of the Cold War is typically framed as a sacrificial action on the part of the United States to safeguard South Korean democracy. (Less remarked upon is the fact that Washington actually bequeathed South Koreans a military dictatorship, which democratized only decades later not because of U.S. policy but in spite of it.)

In fact, the Korean War was pivotal to the emergence of the United States as a global superpower. It ushered in the national security state, the military industrial complex, the empire of U.S. bases that stretches across the globe, and permanent warfare as defining features of U.S. foreign policy. As historian Bruce Cumings writes, the militarized reality we inhabit today is “a product of Korea whether we know it or not.” (Obama seems to agree. In his speech, he praised the war as evidence of the U.S. commitment to “maintain the strongest military the world has ever known, bar none, always.”)

Without a better-informed public, the Korean War and its geopolitical legacies are destined to endure -- a Cold War bequest for generations to come. The war's invisibility, however, comes with another hidden cost: Even now, 70 years after the division of the peninsula, Koreans themselves have been mostly written out of the U.S. account of the war.

Missing are the sobering perspectives of ordinary Koreans who bore direct witness to the conflict's extraordinary devastation: the killing of more than 3 million civilians, the decimation of social and physical infrastructure, and the separation of 10 million people from their families with few prospects for reunion, even many decades later.

An increasingly vocal challenge to this silence is being mounted within the Korean American diaspora -- whose very existence is a direct legacy of the conflict.

At the start of the Cold War, when racist quotas restricted Korean immigration to 100 people per year, the entry of thousands of Korean military brides into the United States laid the foundation for the rapid chain migration that ensued when national quotas were lifted in 1965. Added to this was the pressure on Koreans who migrated southward during the war, for whom Cold War ideological fervor and political repression in South Korea created intolerable economic and political hardships, motivating many to emigrate. The war also spawned a continuous wave of international adoptions to the United States, making South Korea the main source of transnational adoptees until 1991.

More than any other demographic in the United States, Korean Americans understand the human costs of conflict on the Korean peninsula: Even today, over 100,000 of them remain tragically separated from family members in North Korea.

For Korean Americans schooled in the Cold War narrative about the U.S. “liberation” of South Korea from communism, it’s long been considered a matter of self-preservation to foreclose any talk that calls into question the U.S. role in the conflict. “In the U.S., we're still under the influence of ideology,” observed Min Yong Lee, a Korean War survivor, in an interview with psychologist and oral historian Ramsay Liem. “We paint family stories with political issues and then we're scared, and we hide it all.” There's “no chance to open ourselves. No personal history after 50 years, no real identity.”

An early crack in this structure of silence emerged during the lead-up to the first summit meeting between the leaders of North and South Korea in June 2000 -- more than four decades after the signing of the 1953 armistice. Prior to this moment, there was virtually no open discussion of the war among Koreans living in the United States, and no published accounts of their war memories.

Yet that historic North-South opening -- and the possibility of reconciling across entrenched ideological differences -- reverberated throughout the Korean diaspora. Now, with the thawing of Cold War tensions, Korean Americans have increasingly been willing to speak out about the war.

Over the past decade and a half, Korean Americans have turned to culture as a space to critically remember and reckon with the human costs of the conflict.

Ramsay Liem's oral-history project, Korean Americans Remember the Korean War, paved the way for the 2005 exhibit Still Present Pasts: Korean Americans and the “Forgotten War,” which paired installation, performance, and interactive art with documentary film and archival materials. On tour nationally and in South Korea for nearly eight years, this exhibit created a rare space of collective memory about the war, evoking individual, family, and community reflections -- and simultaneously grappling with the war's erasure from the U.S. national narrative.

A collection of Korean American survivor perspectives, Memory of Forgotten War -- a 2013 documentary produced and directed by Liem and Deann Borshay Liem -- also emerged from these projects.

Numerous other initiatives followed. The New York-based Nodutdol for Korean Community Development, for example, has a new community-based project called Intergenerational Stories to Break the Silence: A Korean-American Oral History Project. Initiated by second-generation Korean Americans, it aims to address gaps in personal, family, and community histories, to bridge community divides, and disrupt prevailing narratives about the war and immigration. What stands out about this work is its egalitarian process. Interviewers and interviewees -- and at times audiences -- all participate in the narrative process, motivated by the goal of pursuing justice for war survivors.

In Los Angeles, the intergenerational Missing Pieces Project presented the visions of second- and third-generation Korean American high school students for peace in Korea. Moved by what they called “the heartbreaking stories of division and loss that we heard from the forgotten elders of our community,” they interviewed their own relatives and elderly community members whose hometowns are in North Korea. The Missing Pieces Project partnered with the National Coalition for the Divided Families in a U.S. congressional hearing, testifying to the urgent need for a pathway to family reunions for elderly Korean Americans separated from relatives in North Korea.

A new project was launched this October at a standing room-only event at UC Berkeley, in front of a multiethnic and multigenerational audience of nearly 200 people.

Dubbed Legacies of the Korean War: Korean Americans Remember the “Forgotten War,” this online multimedia archive joins these other projects in its goal of foregrounding ordinary Korean American perspectives as essential to U.S. discourse on the conflict. The project brings together community activists, scholars of critical Korean studies and Asian American studies, and award-winning documentary filmmakers in a far-reaching collaboration that includes participants in the Bay Area, Los Angeles, Chicago, New York, and Seoul.

Underscoring the lived experiences of Korean American survivors of the Korean War and other members of the diaspora, the nuanced stories of the Legacies project span the political spectrum and bridge generations, but they dovetail in a shared call for peace and reconciliation on the Korean peninsula.

For Korean Americans who bore witness to the war’s “violent, unnecessary deaths,” said Suntae Chun, an immigrant from a divided family, the obligation is to “work hard to make a world without war between nations, people, and religions.” Pointing out that the war's still not technically over, 1.5-generation Korean American Eun-Joung Lee adds, “there's definitely a place for second-generation people in terms of facing what the impact of the war has been about.”

Silent no more, the voices that are surfacing in these Korean American oral history projects offer hope for breaking years of Cold War silence, raising awareness of the continuing human costs of the un-ended Korean War, and rethinking U.S. policy regarding the Korean peninsula.