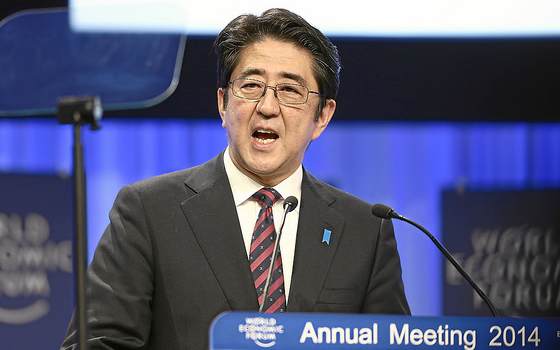 Japan's Prime Minister, Shinzo Abe, on a visit to Washington in 2013 to meet then President , announced confidently: 'Japan is Back!'

To some observers, this may have seemed like hubris given the triple body-blow in March 2011 of earthquake, tsunami and nuclear disaster. Yet the Prime Minister's words now seem particularly well chosen.

Japan remains the world's third largest economy; its political system has been reinvigorated after the return to power of the conservative , now securely in charge of both houses of the Japanese parliament; public support for the Abe administration is at record levels and the government has embarked on a programme of fiscal, monetary and structural reform that has opened the door to radical policy changes that once seemed fanciful.

At home, the Japanese public has embraced civic activism and volunteerism and the government is developing a more proactive foreign and defence policy.

Bending Adversity: Japan and the Art of Survival

book, Bending Adversity: Japan and the Art of Survival

captures the long chain of events that have produced the unexpected return to prominence of a country that sceptics once wrote off as a casualty of the past two 'lost decades' of economic stagnation and apparent political paralysis.

As the Japan correspondent, based in Tokyo from 2001 to 2008, Pilling is well placed to provide perspective on this transition, combining deep cultural and linguistic familiarity with a sharp journalist's eye for the individual stories that run throughout his narrative.

Pilling's analysis is broadly an optimistic one, highlighting the gradual changes that Japan has undergone over the past 20 or so years, while recognizing the importance of a series of critical shocks, both domestic and foreign, that have enabled the country to evolve in a way that challenges stereotypes of a socially and culturally homogeneous Japan, economically conservative and resistant to adaptation. Whether it is the Kobe Earthquake of 1995, the sarin poison gas attack on the Tokyo subway, the rise of China as a geopolitical and economic rival and the collapse of Cold War certainties, or most notably the events of March 2011, the book recognizes the role of crisis as catalyst for systemic change.

The book succeeds especially well in situating Japan in historical perspective. Early chapters give us a sense of Japan's evolution from closed-country (sakoku) self-imposed isolation in the 17th through 19th centuries, through the traumatic wartime years of the early 20th century, and beyond into the boom years of rapid economic development in the 1960s up until the triumphalist 'Japan as Number One' years of the 1970s and 1980s. At the same time, Pilling confidently dismisses the absurd arguments, known collectively as Nihonjinron (or 'theories about the Japanese'), that stress the uniqueness of Japan and its opaqueness to foreign analysis.

The book succeeds most dramatically because of the immediacy and precision of its observations. Opening with a searing account of the destruction wrought by the tsunami on Rikuzentakata, a mid-sized city of 23,000 people on the northeast coast of Japan that was virtually washed away, Pilling shows us the human and emotional cost of the 2011 tragedy. He presents a kaleidoscopic series of vignettes of individuals drawn from all ends of the ideological spectrum and different walks of life, including social activists, politicians, novelists, government advisers, journalists, academics, established businessmen and new, ambitious entrepreneurs. Whether it is via insights into literature and society, former Prime Minister Koizumi's efforts to break the mould of conventional conservative patronage politics, or the revisionist historical views of , granddaughter of Japan's wartime leader, , the reader is introduced to a cast of personalities that underlines the social, cultural and political diversity of a country that is anything but monochrome or predictable.

This book demonstrates the best features of experienced and perceptive journalism. It informs, educates and entertains, and leaves the reader with a powerful impression of why Japan will continue to matter for the foreseeable future. Pilling concludes: 'Two "lost decades" notwithstanding, it would be foolish to count Japan out just yet.'

Bending Adversity: Japan and the Art of Survival