Is North Korea Really that Crazy? 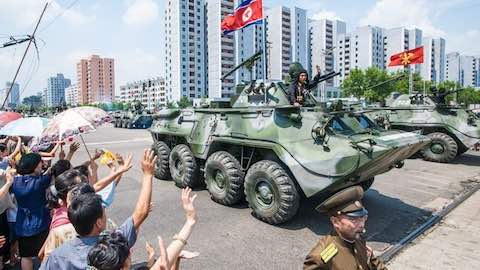 Is North Korea Really that Crazy?

Are North Korea's provocations and pursuit of nuclear weapons really that crazy, or the rational actions of a frightened regime to guarantee its security?

Over the last months, the escalating tensions between the United States and North Korea over the latter's nuclear programme have dominated news headlines. US President Donald Trump has called North Korean leader Kim Jong-Un "rocket man" in front of the United Nations, labelled him crazy and insane, and stated he was willing to halt Kim's pursuit of nuclear weapons by all means, while North Korea labelled Trump a "dotard."

Not everyone might like Trump's colourful rhetoric, but his remarks strike a chord with many. The Democratic People's Republic of Korea (DPRK), or North Korea, threatens to turn Seoul into "a sea of fire" and to destroy the United States. Repeated rockets launched towards Japan seem like a preamble to a declaration of war. This sabre-rattling sounds like absurd talk from a megalomaniac madman, yet nobody would like a seemingly irrational leader to possess nuclear weapons. Trump's call to prevent this at all costs does, at first sight, make sense.

To many an analyst, the DPRK is not just another actor on the international stage that behaves predictably. Reliable data about this hermit kingdom are almost non-existent, and at the same time little is known in North Korea about the rest of the world: many inhabitants thus live in a bubble of propaganda and indoctrination, practicing a quasi god-like cult around the Kim family. The state structure is hyper-centralised around Kim Jong-un, who is basically free to implement any policy and to physically eliminate his opponents, including his exiled half-brother or an influential uncle. Kim and a small Pyongyang-based military elite seem ready to use any ideological, political and military tool to guarantee their survival and hold on power, defying the United States and thus risking to precipitate a nuclear conflict.

But how much of North Korea's provocations and rhetoric are to be taken at face value? Is there a chance that North Korea is a rational actor which pursues nuclear capability as the best tool to guarantee its security? If that were the case, does Pyongyang really pose a threat to peace in Northeast Asia? And how should the other actors, such as China, South Korea, Japan, the US, respond?

Let us start with nuclear weapons: Why would a country pursue them? Surprisingly to many, nuclear arms are most often not meant to be used offensively. The bombs launched on Japan in 1945 demonstrated the destructive power of these armaments. The power unleashed by an atomic conflict today would guarantee 'mutually assured destruction' (MAD): Total annihilation not just of the enemy, but also of the attacker and likely of humanity itself. The strategic purpose of nuclear weapons is, instead, to act as deterrent, i.e. to dissuade an opponent from attacking. The success of atomic bombs lies in their not being used: State A does not attack state B because it fears B will use its nuclear stockpile in retaliation; thus, war does not erupt. Stanley Kubrik's Dr. Strangelove not only contains a concise and accurate explanation of deterrence, but also of the destruction that nuclear weapons can unleash.

How does the logic of deterrence relate to North Korea? Part of the link lies in the very name: the county of Korea was divided into two states at the end of WWII, North and South, who fought a brutal conflict symbolising the tensions of the Cold War. When the Soviet bloc collapsed in 1989-91, North Korea lost its main protector (Moscow) and faced an economic powerhouse (South Korea) supported by Washington. The unification of Germany, which in practice was the incorporation of East Germany into West Germany, sounded alarm bells in Pyongyang: The DPRK should develop a nuclear deterrent in order to survive, not be invaded or annexed by South Korea.

A first nuclear crisis erupted but was temporarily dealt with in the 1990s, but tensions rose again in 2002, when US President George Bush included North Korea in the "Axis of Evil" with Iraq and Iran, as regime which "pursues weapons of mass destruction while starving its citizens." One year later, the US invaded Iraq, and North Korea restarted its nuclear programme. In many regards, this decision makes perfect sense: If the North Korean regime feels that its survival is at risk, it will develop the tool that best can deter an attack. Does this mean that North Korea will use its nuclear weapons? Not at all. Despite its violent threats, it would be suicidal for a small and poor state to attack, as that would automatically trigger a devastating response. A war would likely cause both the fall of the regime and destruction of the country.

If the DPRK does not want war, why does it provocatively shoot missiles over and near Japan? Let's go back to Dr. Strangelove. In the movie, a German scientist explains that once a country develops such a formidable weapon, it must immediately let the world know that it possesses such capability; otherwise, the weapon's deterrent power is null. In recent years, North Korea's nuclear and missile programmes have made remarkable progress, despite international sanctions. The multiple tests and rocket launches have to understood, in part, as signalling. North Korea is letting the rest of the world know that it has to be taken seriously, because it is developing nuclear weapons. Again, this is perfectly logical.

If North Korea is a rational actor, does it really threaten peace and security? It surely does, for many reasons. First, although North Korea does not necessarily aim to start a war, its provocations might create dynamics beyond the original intent. Perfectly rational actors can stumble into situations in which further escalation of conflict seemingly becomes unavoidable. For example, if North Korea feels threatened or believed an attack to be imminent -- for instance, if the US transfers military equipment to South Korea -- Pyongyang might use its nuclear or conventional arsenal to inflict as much damage as possible, wiping out millions of lives, before being overwhelmed. Seoul, a 20-million-people metropolitan area, is just one hour away from the border by car.

A second major risk is nuclear proliferation in East Asia. Japan and South Korea never developed nuclear arsenals because the US nuclear umbrella protected them. However, the growth of the DPRK's nuclear capability may encourage the two countries to start their own nuclear programmes. They certainly have the economic and technological potential to do so in the short to mid-term, and some marginal political groups already advocate nuclear expansion to respond to Pyongyang's provocations. But nuclear proliferation would in turn alarm China, which for years has advocated a de-escalation of tensions on the Korean peninsula. Last year, the deployment of a US missile defence system in South Korea caused vehement protests from China, because the system was allegedly directed not against Pyongyang but Beijing. If Seoul or Tokyo were to pursue the nuclear option, an infinitely stronger Chinese reaction is to be expected.

What, then, is the best way to deal with North Korea? The fact that the DPRK is a rational actor is good news, because it should respond in a fairly predictable manner to incentives. As long as tensions do not escalate, there should be no risk of armed conflict. Exchanges of insults at UN level and threats to use force will not help, for sure, but words are preferable to bullets, bombs or missiles. Continuation of international sanction also seems a poor option, as previous sets of sanctions have not curbed Pyongyang's nuclear programme. The most rational option would be resumption of negotiations with North Korea, which Donald Trump seemed willing to do during the electoral campaign, but has recently called a "waste of time." Previous talks failed mostly because they started from the prerequisite that Pyongyang should promise to completely abandon its nuclear programme, and North Korea never agreed to give up its main bargaining chip. The success of renewed negotiations will crucially hinge on China, the DPRK's main trading partner and the new great power of the Asia-Pacific region. Dialogue between rational actors, even between sworn enemies, is possible; if everyone's rationale is understood. After all, North Korea might not really be that crazy.

Max Fisher, "The Interpreter: North Korea, Far from Crazy, Is All too Rational, " The New York Times, 10 September 2016. https://www.nytimes.com/2016/09/11/world/asia/north-korea-nuclear-missile-programs-rational.html?_r=0

Stanley Kubrik, "Dr. Strangelove or: How I Learned to Stop Worrying and Love the Bomb," Columbia Pictures, 1964.

"Timeline of North Korean Tests in 2016", The Business Insider. http://www.businessinsider.com/timeline-of-north-korea-tests-2016-10?IR=T/#january-6-north-korea-conducts-its-fourth-ever-nuclear-weapons-test-1

"Is North Korea Really that Crazy?"