Inflammatory Rhetoric? ISIL Has Nothing on India's Far Right 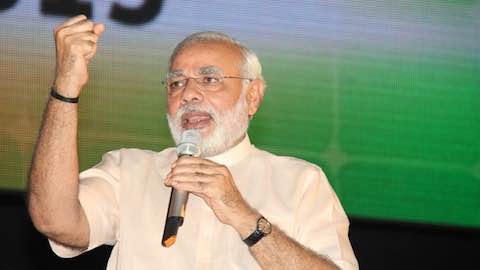 Inflammatory Rhetoric? ISIL Has Nothing on India's Far Right

Islamophobia is sweeping the world: from the United States to Europe to India.

For those reeling at the ever-increasing xenophobia of many American conservatives (foremost among them, Donald Trump), for those saddened by the rise of nationalist and nativist movements in Europe that are openly anti-Muslim … we present the face of anti-Islam in India. Reports the Indian Express:

Speaker after speaker urged Hindus to"corner Muslims and destroy the demons (rakshas)", while declaring that"all preparations" had been made to effect"badla (revenge)" before the 13th-day death rituals for Mahaur."Human skulls would be offered to his martyrdom," VHP district secretary Ashok Lavania, who has been jailed earlier for assaults on Muslims, said.

The occasion? (Explanations in brackets.)

... the Sangh Privar [family of Hindu nationalist organisations] Sunday [Feb. 28] held a condolence meeting here for VHP [Vishva Hindu Parishad, one of those organizations] worker Arun Mahaur, who was killed last week allegedly by some Muslim youths. Among those present on the dais were Union Minister of State [member of the lower executive body] and BJP [India's far-right Bharatiya Janata Party, which has the most representation in India's parliament] Agra MP Ram Shankar Katheria.

Katheria also said,"if we are required to take to the streets, we will come on the streets in thousands. Let anybody dare stop us." Another BJP leader said,"Behead ten heads for one head." Yet another:"During Kali worship, narmund (human skulls) are offered after beheading demons. Before his terhavin, the Hindu community will perform a similar act and offer these narmunds."

What does that sound like? The Islamic State, of course.

Meanwhile, at Tehelka, Kancha Ilaia writes of the Sangh Parivar:

They attack Islam as a religion without any serious analysis of its history and practice. But the actions of their so called Hindus -- whether of murder, rape, attack on general public, intellectuals and so on -- are justified by all of them. The Members of the BJP forget that they are a political party and it is running the nation from the seat of power.

It's tough for those of us in the United States. to stand in judgment of India. The rhetoric of one of our own political parties, the Republicans -- especially Trump, Cruz, and Rubio -- is only marginally less divisive than that of the Vishva Hindu Parishad and BHOP.

"Inflammatory Rhetoric? ISIL Has Nothing on India's Far Right"